(Editor’s note: When an earthquake devastated the country of Haiti on Jan. 12, 2010, mission teams throughout the United Methodist connection answered the call to go and assist in the recovery. For Champaign New Horizon UMC, sending teams to Haiti had been part of a three-year partnership prior to the earthquake. The year 2010 provided even more opportunities to serve for this IGRC congregation). 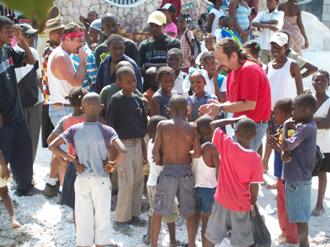 The year 2010 was both difficult and wonderful New Horizon’s Haiti mission teams.
The Jan. 12 earthquake left us all reeling and wondering if the school in Thor was still standing and how many of our beloved friends were still with us in this world.
Many long days full of prayer went by before we got the amazing news that the school was essentially undamaged and that the loss of life in the immediate neighborhood was very low compared with many areas. This was mostly due to the fact that the majority of folks in Thor live in lightweight shanty type houses rather than heavy concrete buildings which are prone to collapse. God heard the prayers for those in Thor and responded with undeserved and amazing grace.
New Horizon has been going to Thor since spring 2007 when we found little more than a lean-to attached to the Methodist church there. Work has continued, mostly by local workers, steadily since then.
Now there is a large two-story building with many classrooms upstairs and room for many other useful areas below.

February was to mark our fifth trip to Haiti, but it had to be cancelled due to the earthquake, or more specifically, the airport being closed.
Fortunately, we were able to assemble a team of six people to go to Haiti in March. This team found widespread devastation around Port-au –prince, ranging from collapsed buildings to people setting up cardboard homes between busy lanes of polluting traffic.
Upon reaching the block in Thor, reunions began and tears flowed as we met with our brothers and sisters in Christ. Hearing the stories of the earthquake was just heartbreaking but was countered by the extreme resilience of the Haitian people and their tremendous faith in God.
We found one small portion of the upper wall had collapsed but little other damage. One blessing was that many people were able to find shelter in the school building and some folks still sleep there to this day. Many things were accomplished by this small team including distributing more than 23,000 meals worth of rice and beans; delivering four large tubs of energy bars; providing 13 tents and many tarps; seeing more than 100 patients in impromptu medical clinics with our nurse; building a stud and tarp home for a large family who lost their home; providing thousands of dollars for work to continue and countless other things. More importantly, we listened and witnessed and saw people come to real faith in Christ.

Laughter and music in classroom

May saw another team go to Haiti. This trip focused on the team meeting with officials to establish a plan for the completion of the school building. We were able to build a second stud and tarp home for another member of the church and his family as well as provide many more tents and tarps.
A music teacher accompanied the team, bringing with her enough recorders for all the children to enjoy music lessons each day. The sound of laughter and music coming from the classrooms upstairs was beautiful and welcome to all after the hard times following the quake. The classrooms were painted, desks were assembled and much debris was removed.  The highlight was the Haitian Mother’s Day service at the church where we all celebrated together, a tremendous blessing for all. 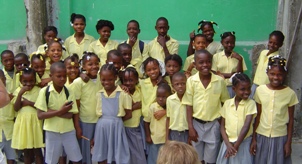 Working to finish the school

September saw a group of eight travelers return to Haiti. This time the team stayed in Thor every day, which eliminated the daily drive back to the guest house through heavy traffic and blocked roads. This went well, with local cooks and security helping make it comfortable.
This team scraped and painted the exterior of the school building and helped dig and pour footing for first floor walls as well as laying blocks around the perimeter. Many people were seen by our doctor and nurse and music lessons continued.  This team was also blessed by a wonderful Sunday service by the new pastor in Thor.
In keeping with our philosophy of using local workers whenever possible, many men from the area were employed for the whole week, almost no one in the neighborhood has other work throughout the year.

We thank God for the opportunity to work in Haiti and for his provision over all of us throughout this difficult year. Many blessings have come about due to the earthquake, such as increased focus on the situation in Haiti and UMCOR and UMVIM’s excellent response to the disaster.
Other teams have begun to be sent to Thor as it has been identified as a priority project, this will surely benefit the neighborhood and the church there, which has essentially been without aid for years.
Thank you to all those who have helped and prayed for Haiti, please continue to pray for those in Thor and all of Haiti. We are scheduled to return April 26 to May 3 and hope to see the school building completed shortly thereafter.