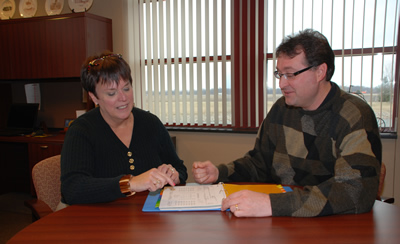 This year, the Illinois Great Rivers Annual Conference of The United Methodist Church takes on added significance for event coordinator Nancy Patton. That’s because part of the conference will be dedicated to raising money for a cause that could save thousands of lives.
The cause is called Imagine No Malaria and its goal is to eradicate malaria by 2015. It is a program launched by The United Methodist Church along with is partners, the United Nations Foundation and the Bill and Melinda Gates Foundation. The UMC is seeking to raise $75 million with money going toward the purchase of bed nets for people in Africa, where 90 percent of malaria cases occur. The church is asking each of its 63 jurisdictions in the U.S. to raise money for the cause, so that will be a major focus of the Illinois Great Rivers Annual Conference when it meets June 1-4 at the Peoria Civic Center. IGRC officials have set a goal of raising between $2.3 and $3.5 million.
The church has already created t-shirts that say, “Imagine No Malaria SWAT Team,” each with a picture of a fly swatter. They will be sold to attendees with proceeds going to Imagine No Malaria. The conference will also feature a 5k run and a dinner where speakers will talk about the global effort to stamp our malaria and the church’s role in it. Attendees are encouraged to wear their t-shirts and create a “sea of green’ to show their support for the cause.
It’s just another reason that Patton loves her job as event coordinator for the Illinois Great Rivers Conference. She came to the organization six years ago from the corporate world where she planned meetings for an accounting firm. “My spiritual gift is hospitality, so when this job became available, I felt as though it was something that God was leading me to. “ She found the world of religious meeting planning to be much more fulfilling than her corporate planning job. “You just know that you are working for a higher being than your everyday bosses,” she says.
Playing in Peoria
Patton plans anywhere from six to 10 meetings annually, ranging from small meetings of 10 to the annual conference, which attracts around 2,000.  The group's annual meeting has been held at the Peoria Civic Center for the past eight years. Patton likes to sign multi-year contracts with venues because she finds she gets better rates that way. “I work very closely with the [Peoria Area] CVB—that’s one of the reasons I like RCMA,” she says, because it allows  the opportunity to strengthen industry relationships.
As the event coordinator for the annual conference, she pretty much plans and oversees the entire meeting process—from contracts to planning to logistics. Typically, the biggest challenge is dealing with hotel -- some hotels. Some properties, she finds, are not as flexible as others. "If they could be a little more user-friendly, it would make our job as event planners a lot easier."
She adds that it’s important for planners to show hoteliers the value of their meetings, particularly the amount of revenue the group brings to the venue and the city.
Fortunately, the recession hasn’t been as big a challenge for her group as it has for others. Through the economic downturn of 2009 and 2010, attendance at the annual conference didn't dip but remained virtually flat.
On Being an RCMA Member
Patton became and RCMA member several years ago at the suggestion of members Robin Barnes (with the Peoria Civic Center) and Julie Bushell (formerly of the Peoria Area CVB but now working in the hotel business). “My first RCMA meeting was Orlando in 2007 and I have attended ever since,” she says.
What she likes best about RCMA is the opportunity to network with other meeting planners. “It’s nice to have all denominations there, and to share the different things we all try to do and the end results we achieve because we are all event planners,” she says.
Patton also appreciates the tutorials and the excellence of the speakers. “I go away feeling like I’ve gained some more knowledge. Plus, it’s a good time. I’ve made a lot of friends through the association.”
Her advice to other planners is simple: Love what you do. Her love for the job was recognized earlier this year when she received the Steve Kouri MVP Award from the Peoria Area CVB, an honor bestowed on the meeting planner of the year.
(Reprinted with permission from the April 2011 issue of Religious Conference Manager, a professional publication of the Religious Conference Management Association).
News