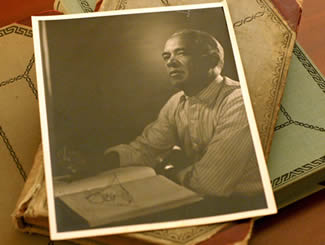 ALTAMONT — By Jingo! That’s what Charles Everett Ellis might have said about the July 31 visit of several descendants to his old home town of Altamont.

Ellis, who used the term “By Jingo” on a regular basis, was a fixture in downtown Altamont during the first three decades of the 20th century. He started keeping a diary on his 40th birthday — Jan. 22, 1927 — and kept on writing for the last 44 years of his life.

The entries are a fascinating look into the life of an African-American in a predominately white community at the turn of the century.

The diaries eventually stretched to 2,560 pages of observations about Ellis’ life — and the larger world around him.

But it all started in Altamont and that’s why members of the Ellis family were in town. Daughters Adrienne Ellis Reeves and Wilma Ellis Kazemzadeh received a plaque after morning services at Altamont First UMC. On top of that, members of the production team accompanied family members to church as part of an upcoming documentary on the family patriarch and his world.

Ellis’ descendants are spread out throughout the United States, but even those who had never been to Altamont recognize the importance of the community in family history.

“This is the homestead,” said granddaughter Lauren Ellis Johnson, who had never been to Altamont before Sunday. “This is like coming to Mecca.

“This is all I heard about growing up.”

Johnson said her grandfather deeply cared for his church. “He had a lot of integrity, very God-centered,” Johnson said. “He wanted to participate in all of life.”

Unfortunately, that wasn’t something a black man could do in the early 20th century. Producer David Henderson, a former CBS news correspondent, said the Altamont shoot is the final element of what is planned as a story of Ellis’ time. Henderson said Altamont stood out as an oasis for the Ellis family, however.

“This period of American history was marked by racial violence, but not here,” Henderson said. “Altamont was really an exception as a very proud farming community with one black family.” 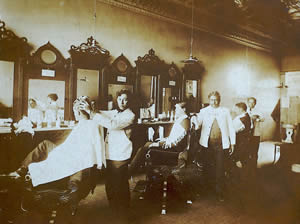 Henderson said the Public Broadcasting Service has committed to airing the documentary, though there is not specific timetable for completion.

“It’s a wonderful story that needs to be told,” he said.

Reeves, who hadn’t been in Altamont since 1964, said her dad always had a soft spot in his heart for his home town.

“The greatest thing is what this place meant to Dad,” she said. “His diaries are full of reference to this church and what it meant in his life.

Kazemzadeh, who moved from Altamont as a baby, told a group of church members that Altamont has always been in the family’s collective heart.

“In our family, Dad never stopped talking about Altamont,” he said.

Henderson said the PBS documentary could be aired as early as 2013.

(Reprinted with permission from the Aug. 1 issue of the Effingham Daily News)
News