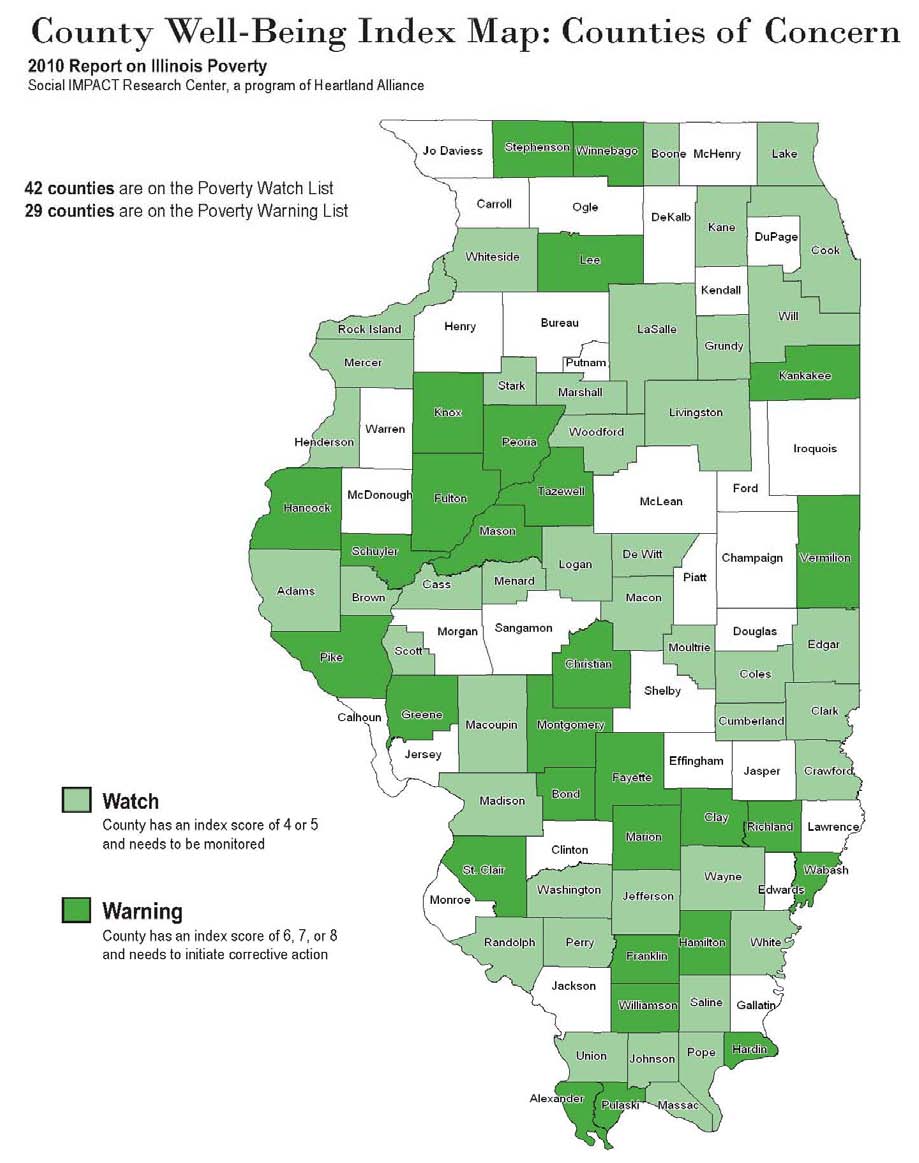 People who had the least to start with before the recession were hit first, hit hardest, and will regain lost ground slowest, according to the 2010 Report on Illinois Poverty. Workers in the lowest income group in Illinois had a 1930’s-like unemployment rate of 27.0 percent in the 4th quarter of 2009 while Illinois’ overall unemployment rate was 10.2percent.

More than 1.5 million Illinoisans, 12.2 percent of the state’s population, were living in poverty in 2008. An additional 16.0 percent—more than 2 million people—were on shaky financial ground with incomes between the poverty line and twice the poverty line. The magnitude of these poverty data, based on information from 2008, do not even fully capture the effects of the recession.
Signs of increasing poverty are seen throughout the state. The report found that poverty worsened in many areas of the state even before the worst of the recent economic crisis, increasing in 63 of Illinois’ 102 counties. A total of 29 counties were placed on the report’s Poverty Warning List, an indication that poverty trends in these counties are the most alarming in Illinois. Another 42 counties appeared on the Poverty Watch List, which accounts for counties where poverty indicators need to be monitored closely.
Male, minority, younger, and less educated workers have been hit hardest by unemployment in this recession. In 2009:
Illinoisans have experienced a tremendous erosion of wealth as a result of the recession:
Extreme poverty has worsened, with those in extreme poverty being subject to great hardship:
At this moment of unprecedented need in modern times, strong and responsive public benefits and human services are crucial to keeping families afloat until recovery reaches main street. Yet years of disinvestment in Illinois’ safety net, combined with the effects of the recession and an antiquated state revenue system, have resulted in an erosion of human services across the state.
“Despite the continued challenges facing the economy, greater hardship, increased poverty and homelessness, and weakening financial security for the coming years are not inevitable,” said Sid Mohn, President of Heartland Alliance for Human Needs &
Human Rights. “State policymakers can create economic stability and promote future prosperity by enacting a responsible budget that includes new revenue and protects vital health and human services from catastrophic cuts, ensuring that Illinois families are protected from deepening hardship.”