Granite City Gains a Vision for Feeding the Hungry 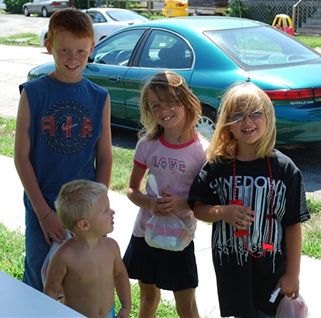 GRANITE CITY – A vision for caring for a community’s hunger during the summer by providing them a free lunch has become a partnership of church, the school district and several government entities that is growing and meeting the needs by taking ministry to them.

Granite City Trinity UMC has embraced such a vision of feeding children during the summer. The congregation, which had been a student pastorate until returning to full-time status in 2009, the congregation began to see deep hunger in its community – the type that causes a child’s belly to growl from lack of food.
When the congregation circulated a simple two-question questionnaire that was distributed to every house in a 12 to 15 block radius. Among those who responded were:
As the congregation began to unwrap hunger, they began within their walls. The church began to feed all children who come to children’s church every Sunday morning and the church hosts a fourth Sunday hot breakfast, knowing that food budgets are often depleted by the end of the month.
The church also began to help a few of the families in the neighborhood who were desperate for food. On one particular day, there was a family who literally had one can of vegetables in their house and when we dropped off bags of groceries a couple of the smaller children came out to help carry. While carrying a box of cereal, one of the little girls said, “it’s going be a good day papa, it’s going be a very good day.”
Even as the church was starting to see the hunger issue,  one of the local grade schools posted a sign in the summer of 2010. It read, “Free lunch. Children through age 18. Ends June 30.” After members of the congregation saw the sign, they asked, “What happens to those hungry children come July 1?” As the congregation began digging deeper, they found out that the number of students qualifying for free or reduced price lunches within the school district had increased to 60 percent with some schools as high as 85 percent. With a total student population of just over 6,500, that meant close to 4,000 were receiving free or reduced priced lunches. Totals are based upon those parents who completed the form and may actually be higher.
Working out of four locations (the two Granite City grade schools, Trinity’s Outreach Center and the Granite City Township Hall), the TWIGS summer lunch program was launched in the summer of 2011 providing free lunches to Granite City area children ages Pre-K to 8th grade Monday through Friday for the months of June, July and August. The program begins the day after school is dismissed for the summer and runs until school resumes in the fall.
TWIGS is funded entirely through grants and personal donations, whether monetary or “in-kind.” A couple of corporations donated pallets of food items and others donated refrigerators and air conditioners for the Outreach Center. Still, another woman, one of the grandmas who brought her grandchildren to one of the sites every day, had a connection to cases of new plastic grocery bags…perfect for sacking the lunches together.
Receiving an initial grant through the IGRC Emerging Ministries Grant Fund, the $3,000 helped to pay for the first shipment of Armour-Eckrich “Lunchmates”.
We were fortunate to have a professional grant writer to assist us. One  of the first lessons we learned from our grant-writer was that we could not be “Lone Rangers” if we truly wanted to receive the necessary funding to support this outreach. We had to have the support of others in the community – school district, city and township officials, corporations, churches and individuals.
Outside of the community support, the church has also partnered with Edwardsville St. John UMC.  Through the connectional system that brings together elder candidates and their mentors, Pastor Lisa Guillams was paired up with Rev. Sheryl Palmer, pastor at St. John. Through this time of mentoring a relationship of trust was built and many discussions and brainstorming sessions were had about the TWIGS program. In the end, the congregation of St. John’s became a crucial “cog in the wheel”. Many in the congregation helped “man” the feeding sites each day and one group, JOMAS (Just Over Middle Age Seniors) had volunteers who worked all four locations every Wednesday.
“We just feel so blessed to have partnered with such an amazing and faithful group of servants for Jesus Christ,” Palmer said. 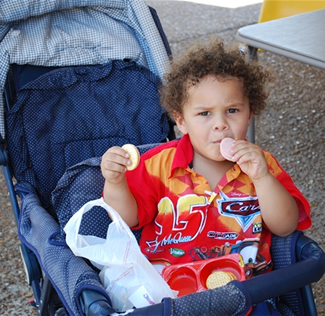 At the end of Summer 2011 it was clear that TWIGS was feeding empty bellies, touching the lives of children and their families and making a difference in the community. On our final day there were many tears shed, hugs given and smiles and laughter shared. The children who began the summer reluctant to come and receive a lunch were running up to say hello and quickly looking in their bags to see what was for lunch that day. We also had many parents and grandparents who shed tears while thanking us for caring enough to help them feed their children. Many mentioned that they didn’t know how they were going to feed their children this summer, but with the help of TWIGS they were able to spread their food budget.
We also learned that we need to be in the neighborhoods where the children live. In many instances, the children are bussed to the schools; therefore they have no way to get to the school(s) during the summer. So, if they cannot get to us, we will go to them. This means we will hand out the lunches from coolers in the back of vans, trucks, or cars. In some instances the volunteers may simply be dropped off with a cooler and a chair.
As we look forward to and plan for 2012, our focus is on more feeding locations, additional sources of funding and partnering with more “food resources”; so that we can reach more children. A huge part of this focus is the implementation of a new 501c3 non-profit known as The Family TreeHouse. Even though the church is a non-profit there are many corporations and foundations that will not donate to church-run programs, but are more than willing to donate to other non-profits. It  is our hope that the much needed additional funding will become available and more and more children can be fed during Summer 2012 and for many summers to come.
News