At the Roots of Methodism: Wesley fought for Prison Reform 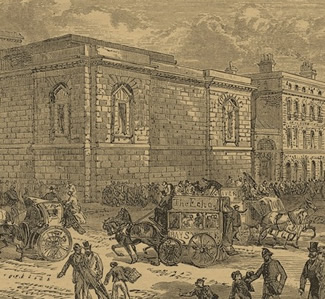 With the prison population in many parts of the world on the increase (the number of people in Britain's jails, for example, is at an all-time high), the church's ministry to prisoners and the prison system has never been more vital.

Methodists, of course, should know that the Gospel imperative to visit those in prison was picked up very strongly by John Wesley and the early movement that he started. And he didn't limit his work to visitations, either. The appalling conditions of the prison system were a cause of great concern to Wesley, who was an inspiration to the movement for prison reform in the late 18th century.

The great campaigner for prison reform, John Howard, drew spiritual strength from Wesley, and statues of both men can be seen together in London's St Paul's Cathedral. Howard once told a group of Wesley's preachers about the challenge and lasting inspiration he had derived from a sermon by Wesley on the text, "Whatever thy hand findeth to do, do it with thy might."

Wesley's admiration for Howard was equally keen. Following an extended conversation with him in 1787, he expressed the belief that the heroic prison reformer was surely "one of the greatest men in Europe." Wesley himself was a constant friend of prisoners. He considered the infamous Newgate Prison in London (where the Old Bailey courts of justice now stand) to be the nearest possible earthly approach to hell.

He once raised money to procure clothing and blankets for French prisoners of the Seven Years War detained in English jails, and he encouraged all his preachers -- when they were permitted to do so by the authorities -- to visit and to minister to the needs of prisoners. His brother, Charles, is also said to have spent a great deal of effort in prison visiting.

Just how familiar John Wesley was with the prisons of his day can be gauged from the fact that in a period of nine months he preached at least 67 times in various jails -- institutions that he had been known to describe as nurseries of "all manner of wickedness." Indeed, it was because of Wesley's often fearless criticism of prison conditions that he was sometimes banned from visiting inmates there.

This led him to make the caustic remark in his journal that he was "forbidden to go to Newgate for fear of making them wicked, and to Bedlam for fear of driving them mad!"

In 1759, Wesley walked to Knowle, near Bristol, to see a company of French prisoners of the Seven Years War. His report was revealing. "About 1,100 of them, we are informed, were confined in that little place, without anything to lie on but a little dirty straw, or anything to cover them but a few foul, thin rags, either by day or night ...," he said. "I was much affected and preached in the evening on 'Thou shalt not oppress a stranger; for ye know the heart of a stranger, seeing ye were strangers in the land of Egypt.' (Exodus 23.9)"

He then set about raising money with which to buy linen and wool cloth to make into clothes. These were distributed to the prisoners in greatest need. Later, the city's governing body sent a large quantity of mattresses and blankets, and it wasn't long before contributions flowed in from other parts of Britain as well.

In early 1761, Wesley wrote a letter to a newspaper commending the transformation that had apparently occurred in Bristol's Newgate Prison. That prison, he observed, was now "clean and sweet," there was no fighting or brawling, contending parties were heard face to face before the keeper, no drunkenness was suffered, and women prisoners were kept separate from the men.

Furthermore, industry was encouraged by the free provision of tools and materials and by the payment to prisoners of a "moderate profit" on all articles made. A public service was provided every Sunday, and a sermon was also preached every Thursday. Free medical treatment was given to the sick, and "a large Bible was chained on one side of the chapel, which any of the prisoners may read."

So remarkable was the transformation from the "filth, the stench, the misery and wickedness" of previous days that Wesley declared the prison to be wearing a "new face." He called for the blessing of God and man upon its remarkable keeper and his amazing achievement. Although Wesley does not mention the fact, the Bristol Newgate prison was run by a Mr. Dagge, an early convert of the evangelical revival.

But how different was this keeper's prison from those up and down the country! "Meanwhile, will no one follow his example?" asked Wesley in his final sentence. In the opening sentence, he had protested that of all the "seats of woe on this side of hell," few equaled Newgate prison.

For decades, in the early 18th century, there was little public conscience to support reform of the prisons, which were ridden with gross cruelty, graft and corruption inflicted upon people -- many of them debtors -- whose crimes would seem petty by today's standards. It wasn't until Wesley began to awaken the soul of England and until Howard gave his life to prison reform, that progress occurred.

At the end of the 20th century and the beginning of the 21st century, prison reform is still not the most popular of causes on both sides of the Atlantic. The inhumane system that existed in Wesley's time has been swept away, and today there is growing support for the victims of crime. However, in some countries, prisoners are still held in appalling conditions, and we are rightly concerned about prisoners of conscience and those being held as hostages.

Many of our Methodist prison chaplains would argue that prison reform is still needed, even in our so-called civilized societies. In this they can draw inspiration from the founder of Methodism, John Wesley.

(Reprinted with permission from the archives of the United Methodist News Service. This story originally was published Sept. 10, 1999. At the time, John Singleton was assistant editor of the Methodist Recorder in London.)