Griffith appointed Assistant to the Bishop 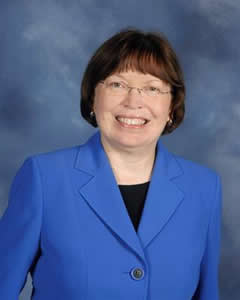 SPRINGFIELD – Bishop Gregory V. Palmer has announced the appointment of the Rev. Janice L. Griffith as Executive Assistant to the Bishop, effective July 1.

Griffith, who is currently in her sixth year as Spoon River District Superintendent, will succeed the Rev. John Hartleroad, Jr., who is retiring after six years of service. Ironically, Griffith succeeded Hartleroad as Spoon River District Superintendent when Hartleroad was appointed Assistant to the Bishop in 2006. Hartleroad served as Spoon River District superintendent from 2001 to 2006.
“Jan has been an effective pastor and an excellent superintendent,” said Palmer in making the announcement Jan. 31. “She will bring strong administrative skills, in-depth knowledge of the conference and pastoral sensitivity to this new ministry. I look forward to working with her.”
Griffith expressed both gratitude and humility in the announcement. “I am grateful for all the ways I have been offered opportunities to grow in my personal faith and as a spiritual leader in the Illinois Great Rivers Conference.  I am humbled by the Bishop's confidence in my ability to serve as the Executive Assistant,” she said.  “I am also excited for the privilege to continue to learn and grow as I step into this new ministry.  By God's grace, I will do my best to serve Jesus Christ and this conference in the coming years.”
A second-career pastor whose own Christian walk has been centered in covenant discipleship groups, Griffith has led the Spoon River District with a high commitment to the connectional system. Spoon River District finished 2011 with 79 of its 82 congregations giving 100 percent in apportionment payments and led the conference with an overall giving of 98.86 percent. Giving conference-wide was 92.21 percent – the second highest giving percentage this decade.
In addition, the Spoon River District has been a leader in the IGRC campaign for Imagine No Malaria, raising nearly $300,000 to date toward the $2.3 million fundraising goal. To date, conference wide $1, 527,000 has been raised in gifts and pledges.
Griffith’s commitment to covenant groups was apparent when she was elected by her peers as the first chair of the Order of Elders in the IGRC, a past chair of the Conference Board of Ordained Ministry and a member of the Clergy Response Team which led several listening sessions among conference clergy in 2005 aimed at bringing health and wholeness to the annual conference system.
After spending nearly 10 years in the banking industry, Griffith discerned a call into the ministry following the birth of her first daughter which culminated in naming her call to a member of her covenant group in 1989.
In 1990, Griffith enrolled at Christian Theological Seminary in Indianapolis, graduating with an M.Div. in 1995.
Ordained a deacon in the former South Indiana Conference in 1993, Griffith served as youth director/coordinator for field education at Calvary UMC in Brownsburg, Ind. After transferring to the former Central Illinois Conference as associate pastor of Decatur Grace UMC on April 1, 1995, she was ordained an elder in full connection in 1997 during the first session of the Illinois Great Rivers Conference. In 2000, Griffith was appointed pastor of Moline Riverside UMC before being appointed Spoon River District Superintendent.
Born in Kankakee, Griffith graduated from Clifton Central High School, attended Illinois Wesleyan University and graduated from Olivet Nazarene College with a BA in business administration in 1980. She has one daughter, Maggie, age 25.
News