(Editor’s note: Barbara Gurtler will be a guest of the 2012 Annual Conference when she introduces a video segment celebrating the 40th anniversary of the Commission on the Status and Role of Women. Gurtler was one of the laypersons who served in the Central Illinois Conference on the predecessor body of COSROW before it was created by the 1972 General Conference. Photo courtesy of PBC Sports Photography) 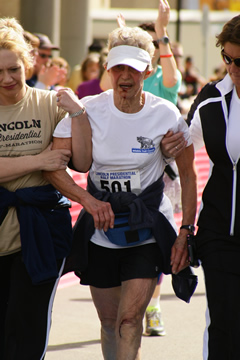 By Dave Bakke
Springfield State Journal-Register
SPRINGFIELD -- There she was, struggling to cross the finish line at the Lincoln Half Marathon on April 7. Already with a bloodied knee and lip from an earlier fall, 77-year-old Barb Gurtler of Peoria fell again a few yards from the finish of the 13-mile race.
Watching from the sidelines was one runner who had already finished, Greg Hoffman from Virden.
“Ten feet before the line she slows,” Greg says. “Her knees buckle and she falls face first into the pavement. Her arms were so tired she couldn’t even completely break her fall.
“Before I could even react, the volunteers at the finish line all jumped from their assigned positions and attended to her, getting her up as blood is coming from her mouth, across the finish line and into the medical tent.”
Shades of Julie Moss, 1982 Ironman, when she crawled across the finish line as ABC’s cameras captured the agony.
Greg contacted me to see if I could find out (a) if the woman he saw is all right and (b) why she was so determined to finish this race.
I talked to Barb. She is fine and appreciates Greg's concern, though she was a little embarrassed by it. She was determined to finish Saturday’s half marathon and did, in two hours, 36 minutes and 12 seconds.
“I am a runner,” she says, “and I’ve been running for 30 years. I just wanted to cross that finish line. I was so close. I ran out of steam.”
I asked if she has ever struggled this much to finish a race. Yes, but it has been a long time. There was a Peoria race about 10 years ago when she was in her mid-60s. She had not trained properly for that one because she had just climbed Mount Elbrus in Russia. That’s 18,506 feet.
“I’m a mountain climber,” Barb says. She has climbed the highest point in every state and on most of the continents.
“I’d been gone for three weeks and not running. I ran the race, it was hot, and I did cross the finish line. But then I passed out.”
There was a 15-kilometer race some years before that, and she wasn’t ready for that one, either. It was hot that day. She used a quick-breathing method to pump up the oxygen in her blood. She did too good of a job and hyperventilated during the race.
“I fell and broke a tooth,” she says. “Blood was pouring out.”
A race official told her that was it, her race was over, and she was going into an ambulance. Barb stood there arguing with the race official, insisting she be allowed to finish. As they debated, another runner came by and promised to stick with Barb the rest of the way if the official would let her continue. He did. She finished.
“Then I went to the hospital and got stitches,” she says.
The same destination was hers after the Lincoln Half Marathon on Saturday. Barb was the only runner in her age group, female 75-79, and so was due a trophy after the race. She had to get that before seeing a doctor.
“They put strips on my lip, cleaned up my knee in the medical tent,” she says, “then told me to go get some stitches. I told them I’d won first in my age group, so I stayed and got my trophy, then went and got (three) stitches.”
She knows what happened to her Saturday. She usually runs about 30 miles a week, but prior to the Lincoln Half Marathon, she was too busy. That’s why she bonked at the end.
“But I’m fine,” she said during our conversation. “I ran for an hour and 30 minutes this morning.”
There is always another race, another mountain, another finish line. Next time, she says, she will be ready.
Greg Hoffman was happy to hear it.
“All of my experience and research about running,” he says, “can be summarized as, ‘As soon as you can stop your mind from telling your body what it can’t do, you can go the distance … whatever the distance you want to go.’
“Ms. Gurtler proves this theory. She pushes her limits for 13.22 miles, takes a nasty fall at the end, and sticks around to receive her award.”
(Reprinted with permission from the April 13 issue of the Springfield State Journal-Register, www.sj-r.com)
News