PEORIA – A pastor who has grown worship attendance by more than 50 percent in three years and a group of leaders who use Walk to Emmaus as an evangelistic tool are the 2012 recipients of the IGRC Harry Denman evangelism award.

Jeff Bealmear, pastor of Aledo UMC, is the clergy Denman recipient, while the leaders of 4th Day ministry at Highland Hope UMC is this year’s laity Denman winner. Retired pastor Don Batz is also honored as a recipient of the Peter Cartwright Lifetime Achievement Award. All three awards were announced at the John Wesley Fellowship meal at the 2012 annual conference in Peoria.
Four churches were also honored for Church Growth as the congregations that recorded the greatest number of professions of faith within four different sized categories.
Those awards include:

Bealmear arrived at Aledo UMC in July 2008 and has led the congregation to adopt a new mission statement, “We exist to connect people to Jesus Christ.” Utilizing an enhanced worship experience, personal growth and development of members and evangelistic mission opportunities, worship attendance has increased from 139 to 213, there have been 22 baptisms and 37 persons have become members on professions of faith.
“Pastor Jeff continually keeps before our church body our duty to connect people to Jesus Christ whether that be in the things we do or say,” said Ann and Gary Olson in nominating Bealmear for the award. “He has instructed and trained many members of our congregation in how to lead a person to Jesus Christ and then has encouraged them to enter into some form of an accountability group and ministry. Through his likable personality and desire to share the love, mercy and grace of Jesus Christ with everyone he met, Pastor Jeff leads by example and reminds us of our duty as Christians to take the Great Commission very seriously and trains us how to comfortably engage in disciple making conversation.”
Rev. Janice Griffith, Spoon River Superintendent agrees. “As I consulted with the SPRC (in 2008) during the pastoral transition, I saw in this church the potential to reach well beyond the town of Aledo into the rural areas surrounding this healthy county seat community,” Griffith said. “In addition, there was a core group of lay leaders who had a dream of revitalization for the church and who were asking for a pastor who could lead them into that dream.”
Raised on a farm in south central Indiana and moving to central Illinois in 1979, Bealmear was raised Roman Catholic and felt the call into ministry as a sophomore in high school. After many years of running from the call, he answered it in 1993. He has served as pastor at Bissell; Sardis-Forman’s Chapel, Ky., while attending seminary; Goreville-Creal Springs; and as associate of Fairview Heights Christ prior to his appointment to Aledo. On July 1, Bealmear will become pastor of Metropolis First UMC in the Cache River District.
Bealmear and his wife Lisa have been married for 25 years. They are the parents of two children – Jenny, 22, and Kyle, 19 – both students at Southern Illinois University-Edwardsville. 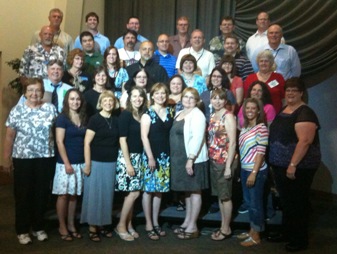 While normally Denman awards are given in recognition of individuals, a group of leaders from Highland Hope UMC caught the eye of the Awards panel this year.
The congregation now has 72 4th Day leaders – a term used to describe individuals who have attended a Walk to Emmaus.
The emphasis of using the Walk to Emmaus as an evangelistic tool began five years ago. As persons completed their Walk to Emmaus, they returned to the Hope congregation with a renewed passion to serve the Lord and filled and/or created key leadership positions in the church. When these individuals gave their testimony, others were drawn to participate in a Walk to Emmaus themselves.
“Through their efforts and encouraging others to attend an Emmaus Walk, they are being awesome witnesses as they strive to inspire others to be all God wants them to be,” said Rev. Dan Perry in nominating the group. “They are helping to encourage others to discover their gifts, living a life worthy of the gospel of Jesus Christ and providing a powerful witness and honor to Christ and the Church.”
Although not the only tool used by Highland Hope UMC for spiritual growth, there are 10 Reunion groups that meet weekly that function as accountability groups to help individuals develop and share a plan for piety, study and action. The church’s Stephen Ministry program also has a large number of 4th Day leaders participating in its ministry. 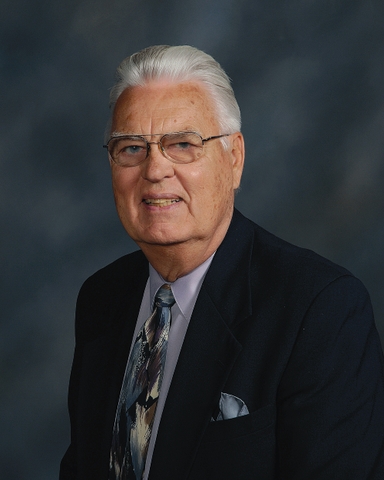 Rev. Dr. Donald Batz, who retired in 2004, is “the epitome of what a United Methodist minister stands for,” said Susan Abbott, a member of Quincy Union UMC, who nominated Batz for the Cartwright award. “He is a gentleman who puts the needs of others above his own and is willing to go the extra mile in order to serve.”
Batz began his pastoral career at the age of 17 when he was appointed to DeWitt in 1952 while attending Illinois Wesleyan University. While attending seminary at Christian Theological Seminary in Indianapolis, Batz was associate pastor of his home church -- Peoria First UMC -- where he served as the minister of youth and later, as minister of evangelism and growth.
In 1961, upon graduating from seminary, Batz served five years as pastor of Chatham UMC, where he completed two major building projects – a new parsonage and an education center.
In 1966, Batz was appointed to Jacksonville Centenary UMC, where he developed a program for MacMurray College students. He served as chair of the Draft Counseling Center and also helped to integrate the Centenary congregation with the black congregation, the McCabe UMC.
In 1971, following completion of his doctorate in Social Ethics from Christian Theological Seminary, Batz was appointed to Murphysboro UMC, where he developed a common mission out of two congregations that had previously merged but yet remained divided.
Batz served at Ransom from 1979 to 1982; Peoria Bradley-Epworth, from 1982 to 1989, where he ministered in the campus church of Bradley University, supervised the campus ministry to college students and developed and worked in cooperation with the Newman Foundation for Catholic Students.
From 1989 to 1999, Batz pastored at Quincy Union UMC where he also served as president of the Board of Chaplains at Blessing Hospital. His final appointment was to Rock Island First in January 1999, where he spent five years laying the groundwork for transforming and revitalizing a declining church in a downtown setting. One of the keys was initiating and developing the church as a weekend meal site for Rock Island’s homeless population.
Although officially retired in 2004, Batz now serves as part-time pastor of St. Mark’s UMC in Camanche, Iowa, a church of 125 and in 2010, added part-time service as minister of First Congregational United Church of Christ in Clinton, Iowa, a congregation of 200.
Throughout his ministry, Batz has also been on adjunct faculty at several schools, teaching courses in medical ethics, philosophy, major world religions and New Testament. He and his wife Aleta live in Bettendorf, Iowa have four adult children.
News