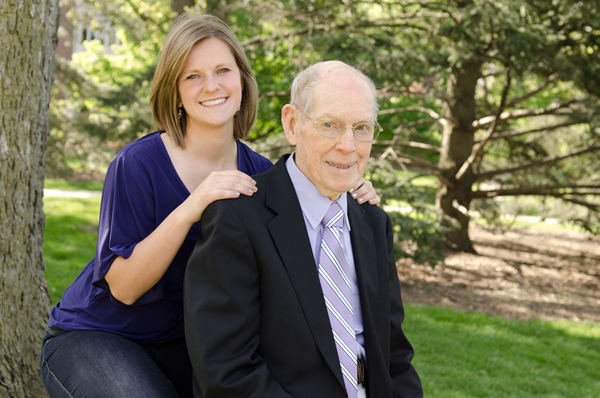 All families have traditions, things that have been passed down from generation to generation. To say the Lowe family is rooted in tradition is an understatement. Four generations of the Lowe’s have attended McKendree and their commitment to the Methodist faith and our institution is still thriving today.

This wonderful legacy began with brothers John and George Lowe. On Feb. 20, 1828, John and younger brother George were among the original 105 stockholders who pledged $10 and $20 respectively to incorporate the Lebanon Seminary, which would later become McKendree College. George Lowe was among the signers of the original articles of organization and was elected as one of the original eight trustees. John paid $5 in tuition costs for the first session of Lebanon Seminary, and since then at least 20 of his descendants have continued their support by attending McKendree.
According to the family, John Lowe and his oldest son, Capt. George Franklin Lowe, erected the first log cabins on the campus, eight acres purchased for $3 an acre. John’s eldest grandson James Henry Lowe ’1862 was the first family member to graduate from McKendree College, and, according to family records, all nine of his brothers and sisters were also enrolled there during the Civil War and/or its aftermath. James’ mother, Martha Phillips, was the sister of David Whittenburg Phillips who was president of McKendree from 1879-1883. John’s great-grandson Rev. Cecil “C.C.” Lowe ’40 carried on the family tradition in the 20th century, followed by five of his seven children.
Sadie Delashmit ’14, of Bloomington, Ill., is the latest member of the Lowe family to walk through the front gates of McKendree. When looking at universities in 2010, Sadie never thought she’d end up at her grandfather’s alma mater. She had been offered a soccer scholarship at another university. But one visit made her reconsider.
“I came to campus and fell in love with the school and the community,” Sadie recalls.
Sadie’s love of McKendree was passed down to her from her grandfather Rev. Dr. Don Lowe ’48. “I’ve always heard my grandpa talk about his days at McKendree and how important it was to him,” she said. “I am so happy that all of these years he has been “preaching” to me about McKendree, and that I decided to listen. This opportunity has opened many doors for me.”
Preaching comes naturally to Don. He comes from a long family line of Methodist ministers and was a former district superintendent of the Illinois Great Rivers Conference. He also served on the McKendree Board of Trustees for over 30 years and received an honorary doctorate in 1970. While a religion student at McKendree, Don was extremely involved on campus serving as president of the student body, president of the Student Christian Association, president of Philo, editor of the McKendree Review, member of the Ex-G.I. Club, Sigma Tau Delta, Student Faculty Council, and the basketball and track teams.
Sadie’s grandfather instilled in her the importance of continuing her education and how instrumental McKendree has been in her family history. Sadie’s Methodist heritage and commitment to helping others has led her to major in education. Her goal is to teach in the toughest school districts in the nation. “I want to work at a school with disadvantaged students,” said Sadie. “I am not afraid to be in a struggling school district. I am up for a challenge and excited to one day be able to make a difference in my students lives.”
Out of the classroom, Sadie is involved with Students Today, Alumni Tomorrow, the Center for Public Service, and the women’s soccer team.
The Lowe family connection to McKendree has played such an important role in the family’s history that in 2005 a special endowed scholarship was established by the family and named in honor of Sadie’s great-grandparents - The Cecil C. and Agnes C. Lowe Scholarship. Cecil and Agnes encouraged their children to pursue their education and were dedicated to their family, the ministry, and their community. The scholarship is given to a student who is pursuing a second career in the ministry, is a member of Kinmundy United Methodist Church, or is a resident of Marion County, Ill.
And so, a new generation of McKendree students continues to benefit from the legacy and journey of one family.
(Reprinted with permission from The Magazine for McKendree, summer 2012 issue, McKendree University.)