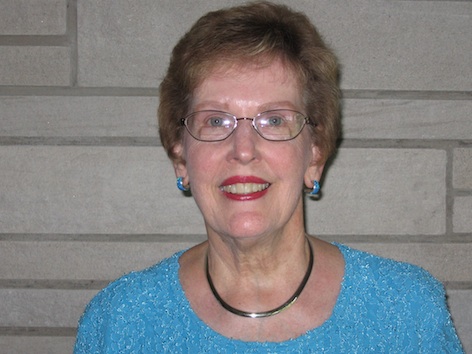 GETS President Philip Amerson made the surprise presentation for Spitzer’s years of service to the church and seminary April 21 in front of her home congregation.
Spitzer and husband, Kyle moved to Peoria in 1968. With the exception of the four years they lived in Wisconsin, they have worshiped at Peoria First UMC. She has served in almost every lay ministry possible, including: Sunday school teacher; youth group volunteer; church trustee; adult education teacher; delegate to Annual Conference; and community outreach ministries, including Habitat for Humanity and HIV/AIDS ministry.
Spitzer was among the first to join Garrett-Evangelical’s Council of Laity in 2009. A year later, she was asked to join the board of trustees. Spitzer was instrumental in helping establish a scholarship at Garrett-Evangelical on behalf of Peoria First UMC. Further, Alice and Kyle have hosted a number of Small Informational Gatherings on behalf of the seminary and its current capital campaign, Forging our Future, Phase III.
"Alice and Kyle have been strong advocates for seminary education as well as supporters of Garrett-Evangelical in particular,” said President Amerson. “Alice has served with distinction as a member of the board of trustees. She has been particularly helpful as an advocate in her home congregation and in the Illinois Great Rivers Annual Conference. The Spitzers are the type of laypersons who think about the future of the church and take actions, large and small, to support the work of educating clergy. Like Eliza Garrett, Alice Spitzer looks to the future and asks, ‘How can I help prepare strong leaders for the church?’ This award is a small token of appreciation for her vision and actions in support of preparing future leaders for the church."
The Eliza Garrett Distinguished Service Award is presented in the name and spirit of Eliza ClarkGarrett, who was the inspiration and chief benefactor/founder of Garrett Biblical Institute. Founded in 1853, the school has grown and evolved into Garrett-Evangelical Theological Seminary. The award is given to honor persons who, by their imaginative acts of communalrestoration and healing, reflect God's mission and purposes for the world.
Garrett-Evangelical, a graduate school of theology related to The United Methodist Church, wasfounded in 1853. Located on the campus of Northwestern University, the seminary serves more than 500 students from various denominations and cultural backgrounds, fostering an atmosphereof ecumenical interaction. Garrett-Evangelical creates bold leaders through master of divinity,master of arts, master of theological studies, doctor of philosophy, and doctor of ministry degrees. Its 4,500 living alumni serve church and society around the world.
News