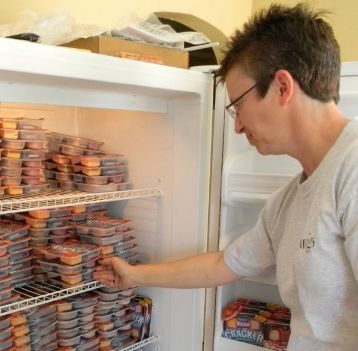 PEORIA – For Rev. Lisa Guilliams, evangelism is about connecting people to Jesus Christ. But she acknowledges that often times words are not the best medium for it.

“What we have learned over the past several years at (Granite City) Trinity is that the spoken word often has to take a back seat,” she said. “As St. Francis of Assisi often said, ‘Preach the Gospel…use words only necessary.’ It is that quote that represents the building block upon which we have begun to revitalize Trinity UMC.”
Guilliams was honored by the IGRC Evangelism Committee with the 2013 Harry Denman Evangelism Award during the John Wesley Fellowship of Illinois luncheon June 6. The awarding somewhat unique in that Guilliams won the Denman Award as a layperson in 2003 for her work with children at Trenton UMC while employed in corporate America. That year, Guilliams responded to a call to ministry that led to her ordination in 2011.
“Lisa and her story have inspired and led me to examine my own personal ministry passions,” said Alan Abert of Alton Main Street UMC, who nominated Guilliams for the award. “With her counsel, we have launched our own summer feeding program in the Alton-Godfrey community. We are following her model in bringing together spiritual gifts with my own congregation to become a branch of her TWIGS program and this summer we already anticipate providing more than 10,000 meals to the children of the Alton community.”
Her district superintendent, the Rev. Gary Wilson agrees. “Lisa not only motivates her church, but she motivates other churches and her community,” he said. “She is an inspiration to all of us.”

The birth of TWIGS

In 2003, Guilliams was appointed to Granite City Trinity UMC. Early in her ministry there, she posed the question, “What is the greatest need in the community? How might we show the love of Christ in a tangible way?”
Guilliams said it would be a six-year journey to answering that question. “The greatest need didn’t begin to ‘show its face’ until 2009,” she said. “A simple two-question flyer that was circulated around the neighborhood came back with, “We are hungry…we need help with food.”
The church got acquainted with a retired couple five houses from the church who were raising their seven grandchildren due to “tragedy in the family. “They were struggling to put food on the table,” Guilliams said. “On one occasion, we took them sacks of groceries when they literally had one can of vegetables in the house and when two of the little ones came to help us carry it into the house, the one grabbed a bag of sugar and the other a box of cereal and with that the little girl looked up at her grandpa and said, ‘it’s gonna be a good day papa; it’s going to be a really good day.”
And then a drive by a grade school which was providing free meals through the school year provided impetus for the church to become involved in a summer feeding program.
“At the center of everything we do is the desire to feed God’s hungry sheep,” Guilliams explained. “Outreach programs started five to six years ago are now vehicles to feed the children of the community.”

There are five components to the Family Tree House:
“One thing is certain: we are not in charge,” Guilliams said about her journey. “We are just asked to hold on tight and enjoy the ride. Recently, we have come to realize that ‘feeding empty bellies is the beginning to feeding empty souls.’ And my prayer is, ‘may it be so, Lord, may it be so!”
News