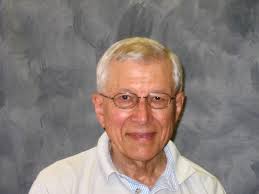 PEORIA – Retired diaconal minister Conrad Steinhoff has been named the 2013 recipient of the Mary Renfro Child Advocate Lifetime Achievement Award. The announcement was made at Friday United Voices for Children’s Breakfast during annual conference.

Steinhoff, who has been deeply involved in many ministries in the metro east St. Louis area, particularly ministries related to Lebanon First UMC, has worked for the welfare of children and families, first as part of the staff at Hoyleton Ministries and since retirement, with Lebanon Kids, Inc.
The organization, which offers after school tutoring, a summer day camp, and life skills like gardening and cooking  has the motto, “All of Lebanon for all our kids!” and seeks to mobilize the entire community into a network of support for its children. It also draws in students from McKendree University, providing students opportunities to work with children and explore their vocational interest in teaching. At the heart of the organization is the one-on-one contact between children and adult volunteers that create a positive role model and enables children to develop into responsible members of the community.
“To say that (Steinhoff) is an advocate for children seems an understatement,” wrote the Rev. Peter Wehrly, pastor of Lebanon First UMC, who nominated Steinhoff for the award. “To many in our community, Conrad is the ‘face’ of Lebanon Kids, Inc.”
Steinhoff was deeply involved in planning and design of a youth building in Washington Park, has been a Big Brother and has mentored several young men and women in Lebanon. He also received a Humanitarian Award from McKendree in 2011 for his volunteerism and community service.

He also assisted with the establishment and nurturing Christian HomeCare Services, an agency to minister to older adults; has delivered Meals on Wheels; active in the local Rotary Club as well as other volunteer work.