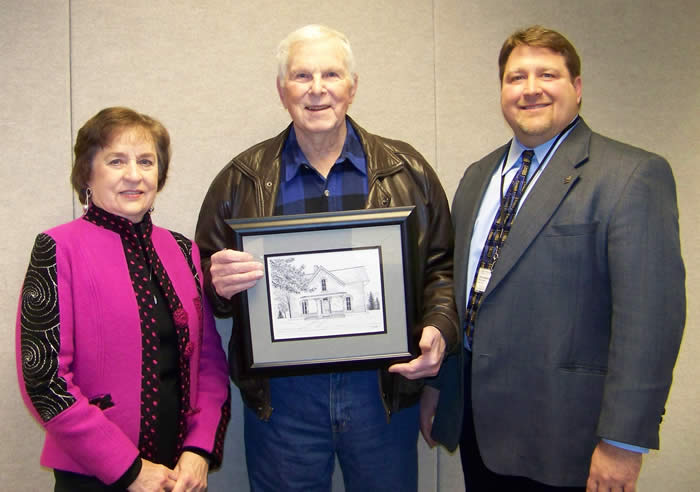 On Nov. 22, 1930, as an infant Pierce was left on the doorstep of Home 300, which was historically known as the Tanner House. “Someone had come up to the old house and left a blanket with me in it, rang the doorbell, and then disappeared,” Pierce said. “The director at that time came out, looked around and couldn’t find anybody, so they took me in.”

After only a few days, Pierce went to the home of Mr. and Mrs. Raymond Pierce in Mt. Vernon who adopted him in 1931.

Margaret Perrenoud recounts a similar story. “Seventy years ago, my siblings and I were taken to the home. We all lived in the big building – in dormitories. Everyone ate at the same  time with each dorm sitting at their own table,” she said. “We all went to the schools in town, and to the Methodist Church on Sundays. I am so happy to have all those memories and I have always been grateful that I had the chance to live at the Children’s Home.”

Lives changed and transformed have always been a part of the ministry of the United Methodist Children’s Home which celebrates its 100th anniversary this year.  A Friends and Family celebration will be held at the Children’s Home on Saturday, Sept. 28 and a new alumni group is forming and will have its first meeting that day as well (see related story).

On Feb. 1, 1913, the Orphans’ and Children’s Home of the Southern Illinois Conference opened in Creal Springs.  The ministry’s constitution and by-laws were adopted by the 1913 annual conference session meeting in Murphysboro First M.E. Church.  Rev. Daniel W. Hopkins was appointed its first superintendent with Mrs. M.E. Mulford employed as the first matron.  Rev. C.B. Whiteside served as secretary to the Board of Managers and C. W. Whittenberg served as the Board’s first treasurer.

Hopkins was orphaned himself at age 10 and grew up with a desire to do something for children who were underprivileged and orphaned as he was.

In its first report to the 1914 annual conference, the Home had received 37 children in the first eight months of operation, “18 of whom were either placed in good homes during the time or returned to their parents.” In all, 79 different children received care with as many as 36 at one time, ages 14 months to 13 years.  Four attendants cared for the children with $1,682.86 paid out in cash for operating expenses.

With the large numbers and the need, expansion and improvements were necessary.  As a stopgap measure, a small cottage was repaired and furnished where the older boys could be placed. But Rev. Hopkins noted that “many are turned away and we shall not be able to do our full duty until a new building shall be erected to care for the many which are turned away for lack of room.” Hopkins noted that there had been 238 applications received during the year. 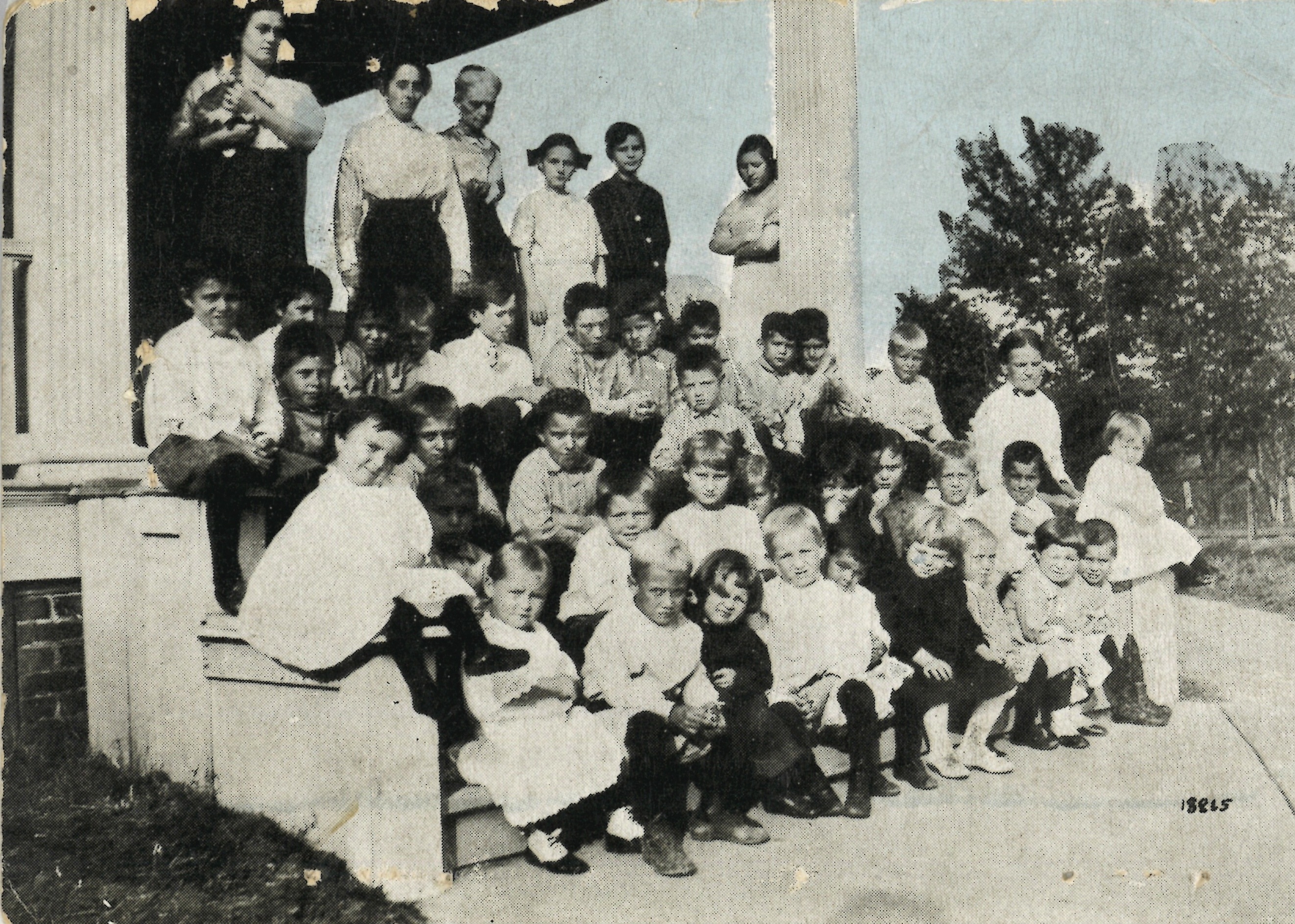 By 1920, the Orphans’ and Children’s Home had passed its probationary period and was no longer on trial as a Conference institution. During the first eight years of operation, more than 500 children had found permanent Christian homes. Conference congregations also stepped forward with additional financial support as 203 of the 214 churches in the Conference made a financial contribution to a Christmas appeal in 1919 with gifts ranging from $1 to $300.

On Feb. 18, 1920, Kirk Cottage – a nine-room building with large basement, bathroom, electric lighted and heated with a hot air furnace – with practically all its contents was destroyed by fire.  No children were injured by the fire and insurance covered only part of the estimated $7,000 loss.

“When the news of the fire became known over the Conference, people very generously responded to the needs with gifts of cash, clothing and provisions and the citizens of Creal Springs kindly assisted in caring for the children until we could make other provisions for them,” reported Superintendent J.Y. Reid.

But the fire and the potential to rebuild led to a much larger discussion with the 1921 Annual Conference deciding this to be a “logical time to relocate the Institution in some more centrally located city and one which could be reached with less difficulty.”

The site selected was in Mt. Vernon, consisting of 25 acres of land, a large brick residence on a paved street, which originally housed both the superintendent and children; a grove of forest trees, potable water and in close proximity to both schools and the church. The property was purchased for $12,000 – with the Mt. Vernon Chamber of Commerce providing the first $5,000 and a $1,000 donation from Dr. Earl Green and Judge W. H. Green, making the net cost to the Conference $6,000.

A three-story brick dormitory was constructed in 1923 to meet the needs of a growing population under the direction of Superintendent Samuel Thero. A new brick home at 400 Farmers Drive was built to accommodate girls in 1957 and the dormitory was remodeled in 1962 to move from a dormitory, ward style sleeping quarters to more private rooms for one or two persons.

Social changes also came in the early 1960’s, as the admission policy was changed to include children regardless of race or creed, and the first African-American youth was admitted.

During the tenure of Superintendent, the  Rev. Marion Farmer (1961-1986), the agency continued to adapt to changing times in society.  The reduction in the number of true orphans was the most significant difference in the children referred for care. In their place, an even more tragic type of referral, became prevalent treatment for young victims of physical and sexual abuse and neglect. Housing was constructed to provide "family" type living to replace the institution setting. The 1970's and 1980's brought new concepts that emphasized the need for teaching social skills and appropriate actions administered by family teachers and assistants.

With the introduction of federal assistance into the child welfare system in the early 1990’s, the focus moved from family teaching to a mental health treatment perspective. While the child welfare system reached an all-time high case load numbers in the mid 1990’s, the late 1990’s saw the beginning of a drastic reduction in the number of children in care throughout the State of Illinois. UMCH responded to this trend by focusing more programming toward community needs to fulfill its mission.

During the Fiscal Year of 2012, services were provided to 1,214 youth, individuals, and families through 12 different programs. In addition, UMCH provided trainings and consultations to 759 professionals.

In 2007, United Methodist Children’s Home was awarded “Organization of the Year” by United Methodist Association, and in 2009, UMCH was awarded the “Innovation Award” along with the prestigious “EAGLE Accreditation” by the UMA.  UMCH was also awarded “2009 Agency of the Year” by United Way of South Central Illinois and “2010 Business / Industry Award” from the Greater Egypt Regional Planning & Development Commission.

“When God calls us to do His work, He also always provides. I am in awe of His grace and mercy!” said Gary Lemmon, current president and CEO. “The UMCH motto: ‘Hope, help and healing for a brighter tomorrow’ starts with the word ‘hope’ and that is where we will start also.”