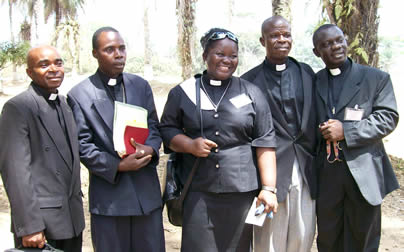 When levels of support for pastor salary support from IGRC reduced, the Liberia Annual Conference voted that all support received for pastor salary support would be equally divided among all of the clergy. Why? Our IGRC district to district partnership created a new difficulty for the leadership of the Liberia Annual Conference because some districts were receiving a lot of support from IGRC while others received very little.  Quite frankly after our second year of partnership, a few districts in Liberia were receiving no support.  Our lack of consistent support throughout IGRC unfortunately created an unfair  gap between the Liberian districts which received much support and those receiving no support.  However, in a culture where everyone is treated as “family,” Liberian church leadership felt it was important that every pastor receive some support even if the amount received was greatly reduced.

Liberian pastors continue to care for many more people beyond their biological families. It is still a common practice for pastors to take into their homes needy children even in the midst of struggling to feed their own families. I personally know of pastors who have ten to twenty children in their home. Why?  It is cultural. It is expected. It is the norm. It is also admirable and self-sacrificing even though we may not understand why this continues to occur.

A few years ago a young woman attending college told me, “I am thinking about taking in a couple more children into my home.”  Of course I asked in my own American frame of reference, “How can you do this? You are in school and you are struggling to feed your own two sons?”  The answer was quick and clear as she said, “I have to do this.  I am 30-years-old now and it is expected of me.”  There are many people in most Liberian families.

In 2006, $20 was a significant contribution to the cost of a bag of rice. Today, the average cost of a 50 pound bag of rice has risen to $40 to $60 depending upon the quality of rice purchased. This increase is partly due to devaluation of their currency and the increasing cost of essential commodities within the country. However, this increase in food cost is also directly related to the economic situation happening due to the Ebola crisis.

There is lack of work because offices and schools are officially closed in an attempt to reduce infection rates.  Church members who once had very little have even less these days financially due to lack of resources. Many United Methodist pastors who once supplemented their meager income by teaching in a UM School, no longer have that income.  All schools have been closed since August and there is some speculation that schools may not open even in February if the current rate of Ebola infections continues or escalates as predicted by the CDC.  People who are in need of food with no income combined with increased food cost is an equation that can only produce an additional crisis -- hunger.

I am deeply appreciative to our congregations who have faithfully given to pastor salary support in Liberia.  Thank you for your faithfulness!  At the same time, I am confident that together we can and should begin to help pastors and their families in Liberia in a more consistent manner.

Please consider a monthly contribution toward Advance 15124A for Liberia Pastor Salary Support. What a difference we could make if every church in IGRC would at least donate enough for each pastor to have one full bag of rice per month! A typical Liberian phrase that is equivalent to an emphatic American “please” is “I beg you!”  So I write, I beg you, let’s start to help United Methodist pastors and their families in Liberia.

Ebola continues to rage and Liberia is experiencing nearly 70% of the 4,000 plus deaths from Ebola with numbers increasing daily. Ebola is horrific and I hear the increased fear in the voices of the several people who call me weekly from Liberia. Last week a dear Liberian friend said, “Bunny, Ebola is worse than the war!  Even though the war was terrible, we usually knew where to run for safety. These days we don’t know where to escape.  This is an enemy we can’t see.”  How true and how heart-wrenching are these words!

It is imperative we continue to pray for those living in the midst of the Ebola threat. Those who are always so very hopeful are no longer hopeful. They are fearful.  They need our prayers!