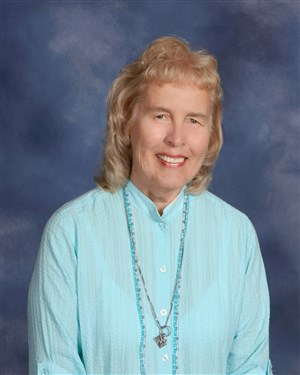 BLOOMINGTON -- This fall marks the 50th Anniversary that Marcia Hishman has served as the organist of Bloomington Wesley UMC.

Marcia and her husband, Richard, arrived in Bloomington in 1966. The couple had been living on the East Coast, when Marcia’s husband accepted a position to teach at Illinois Wesleyan University. During the summer of 1966, Wesley had been looking for an organist and after receiving Marcia’s resume, recommendations, and tapes, the church offered her the job before the couple even arrived in Bloomington. And 50 years later, she is still inspiring and delighting the members of Wesley UMC.

Marcia began studying piano at age 3, with her mother as her wonderful teacher. She began playing organ at 13 or 14. The organ became a major focus in her life, as she became a fanatical fan of the Brooklyn Dodgers, and it was her dream to become the organist at Ebbets Field in Brooklyn.

“I figured I could go to all the games, and I’d maybe even get to know the players and it would just be heaven on earth.” Marcia began taking organ lessons and soon realized she loved classical organ music. Marcia holds a Bachelor of Music degree with Distinction as well as a Performers Certificate in Organ from Eastman School of Music and a Master of Music degree in piano performance from Yale School of Music. While at Yale, she received the Lockwood Scholarship for outstanding university pianist.

Marcia began playing on Wesley’s original pipe organ, an M. P. Moeller Pipe Organ which was installed in 1952 with 1,799 pipes. In 1989, an Organ Committee consisting of Marcia, thirteen other Wesley members, and an organ consultant from IWU began the search for a new organ.

The Austin Pipe Organ that the church enjoys every Sunday was installed in 1992. The organ including the antiphonal pipes in the back of the church was built in Hartford, CT and consists of 3,864 organ pipes. When the installation of the organ was completed in 1992, Marcia presented the Inaugural Recital for the new organ on October 1, 1992. One of the songs played at that recital is one that Marcia shares with the members of Wesley every Easter – Symphonie V, Op. 42, No 1 V. Toccata by Charles-Marie Widor. Marcia's favorite hymn to play is For All the Saints and this was also one of her father's favorites.

Marcia has served with more than 20 different pastors over the years at Wesley including the current pastoral staff members, Vaughn Hoffman, Angie Lee, and Keith Ferguson. She has also served with numerous choir directors, including current music ministry staff, Adria Schumann and Brenna Martin. For a time Marcia even worked with her husband, Richard Hishman, as he filled the position of Director of Music Ministries in the mid-1970’s. Marcia has played thousands of worship services and untold numbers of weddings and funerals at Wesley during the last 50 years. Wesley is so very fortunate that Marcia shares her talent with the church every Sunday and that 50 years ago she was thrilled to have the opportunity to play at Wesley. The members of Wesley hope that Marcia will grace the console behind the organ in their sanctuary for many years to come.