Hopp puts on her boots by answering God’s call 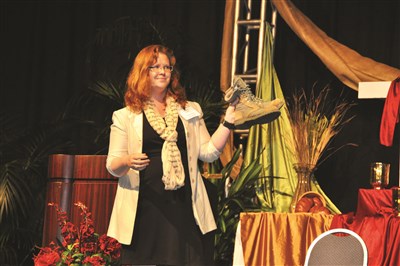 By Paul Black
PEORIA -- For Kristi Hopp, the journey to fully answering her call was a steady progression of being available and being faithful.

Using her pair of boots as a centerpiece of her story, Hopp recounted how when putting on the boots she knew that it wasn’t going to be easy.

Seven years ago, Hopp said her mentor set her down at lunch and said, “Kristi, you are so passionate about trauma-related injuries and post-traumatic stress disorder, why don’t you consider a career in the military?”

An internship in chaplaincy at a VA facility in Philadelphia was a possibility and the doors seemed to be opening. Within three days, an invitation was extended to her. The details and financial arrangements were in place and Hopp commuted between Delaware, Ohio to Philadelphia for six months before relocating to Philadelphia.

“Every day I got up wanting to go to work,” Hopp said. The type of work fueled her passion and she could see she was making a difference.
But while in Philadelphia Hopp kept hearing from veterans.

“Kristi, you are a great counselor, but you don’t know really what we lived through. You don’t really know what it is like to be in the military,” she recalled.
After the internship was completed, the mentor’s question “have you ever thought about a career in the military?” continued to haunt Hopp and the call persisted.

“I’m not military! I’m the farthest thing from military! I don’t even know how to shoot a weapon,” she responded. “I have no idea. I could march, but I’m 5’1” tall, I’m not an athlete, but I don’t know if I can run the distance and do it in the time you want me to do it in. But I can counsel. I can do that.”

And yet, over the next year, the question persisted and came from various people.

“I finally said, ‘OK God, I realize that in order to do excellent ministry, really vital ministry, I am going to have to put on my boots and what with them and serve with them alongside them,” she said.

Hopp said the decision had to be hers because folks back home had the same concerns she initially had.

As she was about ready to go off to Army boot camp, friends and ministerial colleagues expressed concerns about the deployments and how it might impact plans to have a family. And they suggested to Hopp that she might want to consider the Air National Guard.

Using three weeks during Advent, Hopp discerned there was vital ministry she could do in that arena.

“While I was feeling called into military chaplaincy, I also could hear the Holy Spirit saying, ‘it’s your choice’ as to how to live out that calling,” Hopp said.

“I chose the Air National Guard. I signed on the dotted line, took the oath of office (after I was married) and I have been in for nearly six years.

Referring to Bishop Jonathan Keaton’s sermon which opened the Annual Conference, Hopp said, “I got stuck when I put on these boots because after all, I wouldn’t get caught dead in them; they clash with my wardrobe. And the message is for the entire church – laity and clergy alike.  You just have to be willing to go where you are called.”