Fire that lasts: the antidote for fear, faking and failure 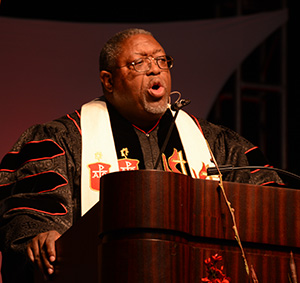 By Paul Black
PEORIA – Bishop Frank J. Beard, using the stories of Lazarus and Elisha, reminded those gathered for Thursday evening’s Memorial Service that God’s fire can and will sustain us beyond the grave.

“Death is never easy to deal with,” Beard told members of the annual conference as well as family and friends of 69 clergy, clergy spouses and lay members to annual conference that entered the Church Triumphant in the past year. “We know that we will all face death but we still don’t like to think about it, talk about it or plan for it.”

But even with such a reality, Beard said that “some of our brothers and sisters are singing” because their faith sustained them to the end and others can receive new life because of the life they lived.

“God has not called us to be superstars but faithful witnesses no matter what,” Beard said. “Elisha’s bold request of a double blessing was an act of faith that he knew would sustain him and enable him to be victorious over the enemy.”

Beard noted that the enemy has three basic weapons that are used against us:
•    Fear – the number one weapon.  The Bible says more than 365 times, “fear not!” “That’s one for every day of every year of your life,” Beard said.
•    Faking – the encouragement of living divided loyalty. “A lot of Christians and a lot of churches are going through the motions,” Beard noted.
•    Failure – “The men and women we memorialize today overcame these three weapons because of their faith,” Beard said. “They are a testimony that we can make it if we walk by faith in the one that walks with us.”

“One day our voices will reunite with theirs and we will sing together, “When we all get to heaven, What a day of rejoicing that will be! When we all see Jesus, we’ll sing and shout the victory!”