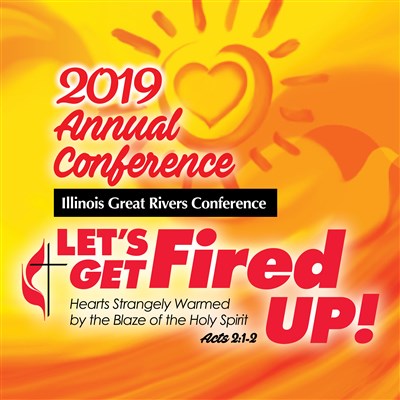 By Paul Black
PEORIA – The Illinois Great Rivers Annual Conference gathered around the theme, Let’s Get Fired Up: Hearts Strangely Warmed by the Blaze of the Holy Spirit, June 6-8 at the Peoria Civic Center.

Elected to represent the conference at the 2020 General Conference in Minneapolis, Minn are:

An offering of $96,735 was collected during Friday’s Morning Manna for the Our Conference, Our Kids campaign, pushing the campaign to $904,954 of its $2.5 million goal. The campaign, which will be used to endow the spiritual life programs at five conference children and youth welfare agencies was approved by the 2016 Annual Conference and launched at the 2017 session.

Other special offerings included $6,704.52 by conference laity for the maintenance fund of the John Kofi Asmah School in West Point, Liberia; $7,605.58 for the Tom Brown Scholarship at Wiley College and $8,589.24 for the Bishop’s Ordinand Trip to the Holy Land in February 2020.

Legislatively, the conference announced that the health insurance allowance paid to full-time pastors will remain at $17,500 for 2020. The conference also approved a 2.25 percent increase to its minimum salaries. In 2020, the salaries will go to $44,358 for clergy in full connection, associate members and provisional elders; and $40,705 for full-time local pastors.

It was reported that all three conference pension funds are fully funded and no increase was needed in the Clergy Retirement Security Program (CRSP) contribution for 2020. No change was needed for the defined benefits portion of the CRSP plan, which stands at $5,700 per year for full-time pastors; $4,275 for ¾ time pastors; and $2,850 for ½ time pastors. Pastors at ¼ time or less are not eligible.

It was also announced that the closing of Living Springs Camp was consummated just days before the start of the Conference session. In 2015, the annual conference authorized the sale of three of five conference camps – Living Springs, Epworth and Jensen Woods – to consolidate and invest in the other two campsites – East Bay and Little Grassy. The sale of Living Springs was the final sale of campsites and conference attendees saw a report of the improvements that have been made with the sale proceeds at East Bay and Little Grassy.

A total of 30 pastors with a combined 769.5 years of service retired.