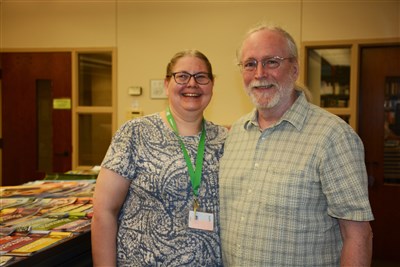 By Paul Black
SPRINGFIELD – In the spring of 1976, Doug Stone was completing high school and getting ready to attend Illinois Wesleyan University.

As most would-be college students, Doug was looking for work and was finding it somewhat difficult to find something.

Doug’s father was discussing the matter with Central Illinois Conference Council Director Burt McIntosh and Burt said, “I could use him for a couple of weeks if he wanted to work in the Conference Office.”

The two-week temporary position turned into a career that spanned 46 years when Doug completes his ministry with the Illinois Great Rivers Conference July 1. His wife, Jill, whom he met when she started working for the Conference in 1988, is also completing nearly 34 years of service when she retires a month later on Aug. 1.

“I appreciate the servant attitude and heart that both Doug and Jill display. They have served effectively and tirelessly for many, many years, Bishop Frank J. Beard said. “I was able to bear witness to their faith during tough times of personal challenge. Their commitment to ministry and mission, and their love for each other never wavered. They have served the IGRC well. And we are blessed because of them.”

“We have worked with a lot of great people and still do,” Doug said as he and Jill sat down for a few minutes to reflect on their respective times with the Conference.

The Bloomington Conference office sat on the campus of IWU and it was common practice that the Conference used several students as interns. “What made the temporary job possible was that an employee got married and she went on her honeymoon. After the two weeks, I was asked if I would like to continue.

“I started as the swing man – kind of one who moved around and helped wherever I was needed,” Doug said.

As the Conference office got its first computers, Doug assisted with computer issues and then in 1988, both the mailroom manager and the print room manager retired and the two jobs were combined and I took over those responsibilities.

About the same time, Jill, a member of Normal First UMC, applied for a job at the Conference office at the urging of John Woodruff, then Conference Treasurer.

Ironicially, her first responsibilities in the Conference office was working for Doug for about an hour.

“The persons who I would be working for were busy and so they sent me to Doug to familiarize her with the work at the Conference office,” Jill said.

“And obviously, she made an impression on me,” Doug said with a smile.
Jill’s first responsibilities were managing United Methodist Reporter subscriptions for Director of Communications Bettie Story as well as clerical and receptionist responsibilities. Later that year, a position opened in the United Media Resource Center, which had three employees on staff, and Jill found her calling.

When UMRC Director Mary Lou Scott retired in 2001, Jill assumed the responsibilities as the sole person in the UMRC and has managed its operations ever since. In more recent years, she has also returned to providing clerical assistance to both the Camping and Congregational Development ministries on a part-time basis.

In 2004, when the United Methodist Center was opened, consolidating offices in Bloomington, Mt. Vernon and Springfield, the Stones were part of a handful of employees that relocated to continue their respective ministries to the Conference.

Both Doug and Jill noted the number of changes in both of their positions as they near retirement.

The one area that has emerged in Doug’s work is management of the Conference’s databases – so much so that the person who will follow Doug will focus exclusively on the database work.

Jill’s work in the UMRC has also changed in that it was a partnership at one time with two Illinois presbyteries of the Presbyterian Church. More recently, as other conference’s media centers have closed its operations, the IGRC has provided its services to Northern Illinois, Iowa and the Great Plains Conferences.

On May 19, the Conference announced that the UMRC was relocating and partnering with Springfield Kumler UMC. As part of the transition, Kumler UMC will be housing the resource center and managing the lending library of resources. The UMRC will pause its lending and operations on June 1 and resume operations on Aug.1, 2022.

Jill and Doug said they are looking forward to having more time to travel and pursuing hobbies. “We have family in New York, the Carolinas, Florida, Texas and the West Coast,” Doug said. “With Covid, we haven’t been able to see family.”