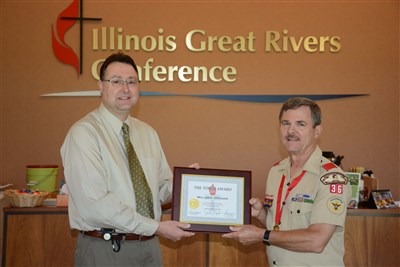 By Paul Black
SPRINGFIELD -- Bill Ettinger, a member of Springfield Laurel UMC received the Torch Award recently during a Court of Honor at the church.

Bill Ettinger has been involved in the Scouting ministries of his church for most of his life. He was a Cub Scout and Boy Scout at his home church in Taylorville, attaining the rank of Eagle Scout. After college, Bill became involved with the BSA in the Abraham Lincoln Council by serving as an adult advisor to the Order of the Arrow, and began serving as an Assistant Scoutmaster.

In 1975, Ettinger became Scoutmaster of Boy Scout Troop 36 at Laurel UMC and continues in that capacity today, completing 30 years as Scoutmaster. He also serves as co-chair of the Abraham Lincoln Council BSA Silver Beaver Committee. Bill has been an organizer for the Council First Aid Meet for over 20 years and has done a number of work details at Camp Bunn.

Torch Award recipients must be an active United Methodist Church member, have a continuous record of 10 years or more in working with civic youth serving agencies or scouting; assume leadership within the program; counsel young people enrolled in its religious awards program.