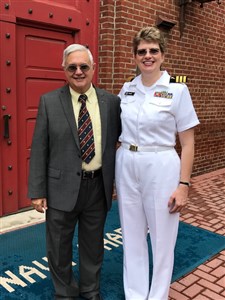 IGRC elder Margaret Siemer was promoted on September 1 to the rank of Commander in the US Navy at a ceremony held at the Navy Yard Chapel in Washington, DC. Administering the oath was another IGRC elder, retired Navy chaplain Bob Phillips, who was pastor of the Navy Yard chapel in the mid-1980's.
Margaret is the only conference clergy member serving in active duty ministry to military members and their families. Entering the Navy from appointment as associate pastor at Springfield First UMC,
Margaret has served with the Marine Corps in Iraq, as chaplain on a guided missile cruiser in the Western Pacific, as a recruiter based from Texas, as a Protestant chaplain at the Naval Academy in Annapolis, MD, and as Protestant chaplain onboard the nuclear aircraft carrier George HW Bush. Her current assignment is at Naval District Washington DC, including the Navy Yard chapel where the namesake of her last ship, then Vice President and Mrs. Bush, occasionally worshipped.