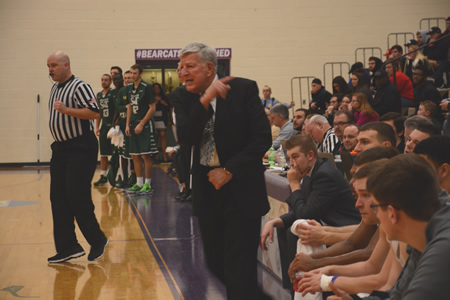 The Bearcats, plagued with 27 turnovers combined with six Missouri S & T players scoring in double figures, slowly and methodically worked their way back into the game.

Coach Harry Statham called a timeout and over the course of the next 10 minutes, McKendree began its run. Shooting 62.5 percent from the field with freshman guard Nate Michael and junior guard David Franklin pouring in 30 and 29 points respectively, the Bearcats chipped away at the Miner lead. Still down by 12 with 3:41 remaining, McKendree scored 14 of the last 16 points of the game to tie it at the end of regulation, 99-99, and went on to post a 108-105 victory Feb. 11.

The game was a milestone for Statham, who became the first collegiate basketball coach among four-year colleges and universities to earn his 1,100th victory in a career that spans 50 years at the United Methodist-affiliated school. He surpassed former University of Tennessee women’s coach Pat Summit just a week earlier when he notched his 1,099th victory over Maryville University.

But Statham seems somewhat detached from all the hoopla surrounding his accomplishment. Tying the record "was the last of my thoughts," he said from his coach’s office the morning prior to the Missouri S & T game. "I'm not worried about it. If I don't get it today, I get it tomorrow, next week, next month, next year. Those things happen. I'm not into that."

What he is in to is his team, his players and what they do on the court. Over his 50 years at the helm of the Bearcats, the 78-year-old Statham has created a culture that doesn’t change. “We stress integrity and character as a priority here,” he explained. “Academics are second and basketball is third. In the long run, it wins out. You might lose some games, but you probably would lose them anyway when a player’s priorities aren’t straight.”

Some might cite the philosophy as “old school” in a day when college basketball has become a big money sport. 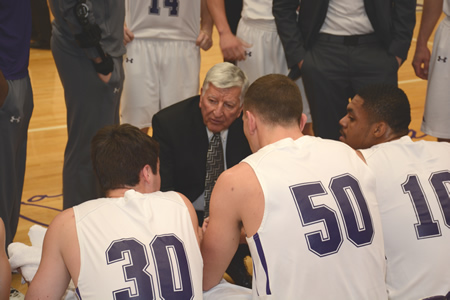 Statham’s career has included 40 post-season appearance and 15 National Association of Intercollegiate Athletics (NAIA) national tournament berths, including two five-year runs between 1999 and 2004 and again between 2006 and 2011. His Bearcat teams have garnered 12 Conference championships and he has been named Conference Coach of the Year eight times, NAIA-IBCA Coach of the Year 12 times and was the NAIA National Coach of the Year in 2001-02.

The 2002-03 team posted a 34-4 overall record and finished among the top four NAIA schools in the country. The 1987-88 Bearcats finished in the NAIA Elite Eight which included a 124-107 victory over Huron College (S.D.), where the combined point total set an NAIA tournament record that lasted 20 years. View Coach Statham's year-by-year coaching record...

Three McKendree players have gone on to the professional ranks. Paul Funkhouser was a supplemental pick of the NBA’s Chicago Bulls and the Carolina Cougars of the former American Basketball Association. Belleville native Dale Haverman was a fifth-round pick of the Seattle SuperSonics in 1977, and Matt Laur, grandson of IGRC pastor, the late Rev. Lester Laur, was selected in the fourth round of the National Basketball Development League (NBDL) draft by the Columbus (Ga.) Riverdragons. Several former Bearcats have played professionally overseas, while others have enjoyed success in coaching at the high school and collegiate ranks.

Statham was born in May 1937 in Paducah, Ky., just five hours after his mother, Vada, attended his father’s funeral. The elder Statham was a blacksmith for the Illinois Central Railroad and had contracted pneumonia after cleaning up a massive flood of the Ohio River that spilled its water in his hometown of Brookport, Ill.

Raised by his widowed mother and her parents, Statham worked at the local gas station during high school where he learned the old school values that would serve him well. As a high school senior, he was given the opportunity to coach a grade school team and the passion for coaching was ignited.

In 1955, Statham headed to Oklahoma to attend college until a friend suggested McKendree College, located just 25 miles from St. Louis.

Statham was a full-time student for two years, playing baseball and basketball. But he struggled financially, so he became a teacher and junior high basketball coach in 1957 at O’Fallon, working nights and summers toward his bachelor’s degree in physical education.

Upon graduation, Statham moved on to the University of Illinois where he was a graduate assistant for the men’s basketball and track teams while completing his master’s degree.

It was then off to Forman High School in Manito for two years and to Dwight High School for three years where he coached high school basketball.
Read story of 9 OT high school game...

So in 1966, at the suggestion of friend Dale Cruse, Statham took the basketball coaching job at McKendree, where he was hired as men’s basketball coach and the athletic director. He also was the men’s baseball coach for the first two years.

“My dream was to win a state high school basketball championship,” he said. “I consider the dream job was to land a position with a school that had a deep tradition – like Mt. Vernon or Centralia. I thought I’d have a winning season or two here and move on.”

But the doors of opportunity weren’t there.

“I finally realized that I wouldn’t be going back to high school coaching, which was fine,” Statham said. “I really liked the idea of picking my own players. And then I thought I would really like to coach Division I basketball, but it wouldn’t be possible from McKendree without going and being an assistant for who knows how many years. I wasn’t willing to do that, so I just stayed.”

One of the greatest challenges has been McKendree’s move from the NAIA ranks to the National Collegiate Athletic Association (NCAA) Division II play. McKendree now plays in the competitive 16-team, two-division Great Lakes Valley Conference where wins have not been as easy in the past four years.

“We have been rebuilding since going to Division II and it takes some time,” Statham conceded. “But it is good for the kids. Many times, we have landed good players that have tried to go Division I and then went away to school, didn’t like it and came back and played with McKendree.”

McKendree also plays Division I teams on their schedule, which included Drake University this year and the University of Illinois and Missouri State University last year.

“I want our players to play the best competition,” Statham said. “In the long run, it benefits us.”

At age 78, there is no talk of retirement. “I am in good health and I enjoy what I am doing,” he said.

When asked about his legacy, Statham said it goes back to the integrity and character issue.

“I would hope that it could be said that I was a guy that did it the right way,” he said. “I want people to see that we turned out quality people – on the court and in life. We didn’t cut corners.”
News