Let's get fired up!: Answering the call to ministry 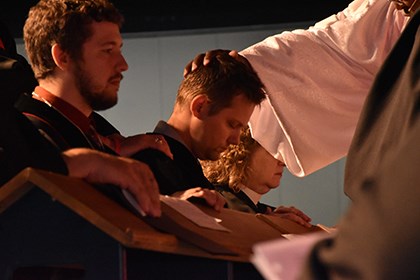 “Ministry will take you places that are filled with challenges,” he said. “The Bishop and Cabinet will not always get it right, but God will take you where you are needed the most.”

The Service of Ordination and Commissioning on Saturday morning capped off the 2017 Annual Conference on Saturday morning – a morning devoted to celebrating those that have been recommended for ministry and the giving and receiving of appointments deployed for service throughout the 87 counties in the southern two-thirds of Illinois for the upcoming year.

“Ministry in Jerusalem was going great and then Stephen was martyred,” Beard said. “A wave of persecution hit the church. Philip went to Samaria, God got loose in the house! The Lord spoke to Philip and told him to leave Samaria and to head out for the desert road. He encountered an Ethiopian eunuch. Converted and baptized him and before the water could dry, the Spirit took him to Azotus, he was then led from city to city until he reached Caesarea.

“I love what the Bible says, ‘He preached Christ there!’ Where ever you find yourself, PREACH JESUS!” Beard said.

Beard noted that John Wesley to Thomas Coke as he was commissioned, “Offer them Christ!”

“My worst day as a district superintendent was when the (Indiana) Cabinet summoned a pastor who had turned down an appointment,” Beard said. “When asked why, he listed his credentials and accomplishment and then said, ‘I am too good for that church!’ I sat there and wept.”

Beard noted that Elisha didn’t have a back door plan – he burned the plow, slaughtered the oxen and studied at the feet of Elijah.

“There is no turning back,” he said. “When you do, you always drag someone else with you.”

Beard shared his own call to ministry which occurred in his junior year of high school.

“I was invited to take a mission trip to Haiti. We got off the plane just before dark and were taken by van to the top of a small hill that overlooked the city. Our assignment was to read a passage of scripture and to spend time in prayer asking God to use us during the week.

“I was wrestling with a call to ministry. I could not decide if I wanted to be a Director of a Club like my mentor, or to be a pastor or some other field of Christian service. I got alone by myself. I bowed my head to pray. I was so frustrated! ‘Lord, why don’t you show me what you want me to do and what you want me to become?’

“I had an unusual peace and I have never worried and fretted about ministry.”