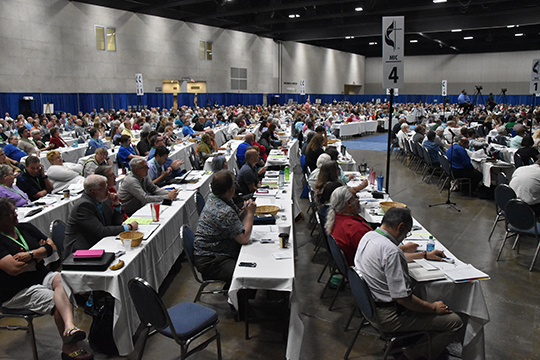 IGRC Communications produced a promotional DVD-ROM, that includes three video segments that are both with and without closed captioning, as well as a master file for a trifold brochure and bulletin inserts to assist local churches in their efforts to raise funds.

The campaign already has received $75,000 in gifts prior to the official launch. The five agencies have had to rely upon benevolent giving as the Illinois General Assembly has yet to pass a state budget in since July 2014.

The conference comes on the heels of announcement by The Baby Fold, which will close its residential treatment center June 30, displacing 14 clients. The agency serves more than 1,000 clients in its various programs.

The conference also centered on prayer as the conference welcomed its new bishop, Frank J. Beard, who was elected and assigned to the Illinois Area Sept. 1, 2016. Bishop Beard expressed his gratitude for the welcome he has received and conferees responded with a standing ovation to his leadership.

The conference spent a great deal of time wrestling with a proposal from the conference’s Board of Pensions to enlist Wespath (formerly the General Board of Pensions) for a private exchange in which to provide clergy health insurance for 2018. The plan would have been mandatory for clergy but optional for spouse and dependent coverage.

Instead of paying a taxable health insurance allowance of $13,200 to the pastor, the plan would have allowed the allowance to be paid directly from the local church to the conference tax-free. And pastors who opted out of the plan would not receive the allowance and the church would still pay into the plan. Several noted that while such a plan was workable for singles and perhaps, older members of the group (the average age is 57 years old), the costs were difficult for clergy with children and stay-at-home spouses where a second insurance plan was not available.

In the end, the proposal was referred to the conference Board of Pensions for further work on assisting those clergy who are in crisis under the current plan. In related legislation, the health insurance allowance was increased to $15,000 for 2018 – up from the current $13,200.

In addition, the Commission on Equitable Compensation recommended a 2 percent raise for those at minimum salary -- $42,448 for clergy in full connection, associate members and provisional elders; and $38,952 for full-time local pastors. The conference also approved the Conference Board of Pensions report that will hold local church contribution rates for 2018 at their current levels -- $5,700 for full-time pastor, $4,275 for ¾ time pastor; and $2,850 for ½-time pastor. Pastors at ¼ time are not eligible for the pension program.

The conference laity collected $5,645 for the John Kofi Asmah School in Liberia. The school, located in West Point section of Monrovia, was built by IGRC laity and annual offerings have been taken to furnish the building since its opening in 2011. Other special offerings included $8,504 for the 2018 Wesley Pilgrimage for this year’s newlyordained pastors and $8,195 for the Tom Brown Scholarship at Wiley College, one of the church’s historically Black Colleges. Conferees also brought 2,129 pounds of supplies and $3,024 in monetary gifts for the Midwest Mission Distribution Center, as well as 2,068 pairs of underwear, 447 onesies and 2,487 pairs of socks for Fair Hope Children’s Ministry in Danville.

Eight elders and a deacon were ordained and joined two whose elder’s orders were previously recognized as full connectional members. Six provisional elders and a provisional deacon were commissioned. A total of 31 pastors with a combined 894.75 years of service retired.