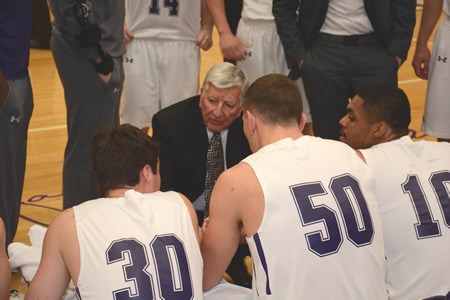 Statham, who is in his 51st season as the head coach at his alma mater, became the all-time wins leader in four-year college basketball history – at any level, men's or women's – on Feb. 6, 2016, when McKendree defeated Maryville University 92-84 in St. Louis. That victory was No. 1,099 in Statham's illustrious career, which pushed him past the late Pat Summitt for the record. Statham has now stretched his career win total to 1,107 as of Jan. 20. Statham was featured as the cover story of the March 2016 issue of The Current.

"Obviously I am overwhelmed to be nominated for the Naismith Memorial Basketball Hall of Fame," said Statham. "Coaching basketball is a labor of love for me. We have been successful because of our players. I am extremely proud of the high character and quality people who play for us at McKendree."

Back on Nov. 13, 2009, Statham led McKendree to a 79-49 win over East-West University, which marked career victory No. 1,000. He became the first men's college basketball coach to reach the 1,000-win mark, and is one of just four men's coaches currently in the exclusive club. Statham has been the all-time leader in victories in men's four-year college basketball history since Dec. 1, 2004, when he collected win No. 880 to surpass the late Dean Smith, who held the record at the time.

In addition to holding the all-time wins record, Statham has coached in more games than anyone in college basketball history. Through the Salem International contest, Statham has been on the sidelines for 1,590 games over his 51-year career, all of which have come at McKendree.

Over his career at McKendree, Statham has guided the Bearcats to post-season play 41 times. McKendree made 15 appearances at the NAIA Division I Men's Basketball National Championship prior to the program's transition to NCAA Division II membership in 2013. Among those 15 appearances was a run to the NAIA national semifinals in 2003 as well as quarterfinal appearances in 1997 and 2009. The Bearcats also won 12 American Midwest Conference championships under Statham's leadership.

"We are proud to learn of Coach Statham's eligibility for the Naismith Memorial Basketball Hall of Fame," said Chuck Brueggemann, director of athletics at McKendree. "Harry has had a positive impact on the many student-athletes he has coached at McKendree, and his accomplishments in the coaching arena only begin to reflect a small portion of that impact. He has always been, and continues to be, a great ambassador for McKendree University and the game of college basketball."

For the Naismith Memorial Basketball Hall of Fame, Statham is among a group of first-time nominees that includes former Mount Saint Mary's head coach Jim Phelan – who held the games coached record until Statham surpassed the mark in 2013 – as well as current University of Kansas head coach Bill Self. Former NBA standouts Tracy McGrady and Muggsy Bogues are also part of the Hall of Fame eligibility list for the first time.

A press conference announcing the finalists from the North American and Women's committees for the Naismith Memorial Basketball Hall of Fame will be held at NBA All-Star Weekend on Saturday, Feb. 18 in New Orleans, La. The entire Class of 2017 will be unveiled on Monday, April 3 at the NCAA Men's Final Four in Phoenix, Ariz. Enshrinement activities will take place in early September in Springfield, Mass.