By Paul Black
MT. CARMEL – There may not be an Illinois community whose history is more interwoven with frontier Methodism than that of Mt. Carmel. 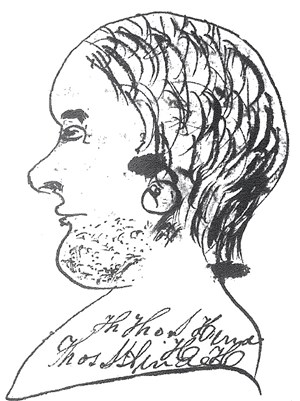 Hinde was an ordained Methodist minister and traveled extensively to advance the interests of the church. He was a pioneering circuit rider in the early 1800s in Kentucky, Indiana, Illinois, and Missouri. Hinde wrote and published religious articles in many leading publications.

Francis Asbury considered Hinde important to the church. He frequently met with him and mentioned him in his journals. Historian Lyman Draper spent more than twenty years collecting documents by and about the Hinde family, along with papers of other important figures of the Trans-Allegheny West. The Draper Manuscript Collection at the Wisconsin Historical Society holds 47 volumes of Hinde's personal papers, donated by his family after his death.

His father was an English doctor who served as a physician to Patrick Henry and General James Wolfe and is seen tending to the general in a painting from the Battle of Quebec. Little is known about the elder Hinde's early years except that the family moved from Virginia to Newport, Ky., in 1797, when his father was awarded a land grant of 10,000 acres for his services in the American Revolutionary War.

Hinde would be the only one of the three to settle in Mt. Carmel. He was a prolific writer of religious hymns. He died Feb. 9, 1846 and is buried in Sand Hill Cemetery in Mt. Carmel.

At the Baltimore General Conference in 1823, Beauchamp came within two votes of being elected a Bishop. He served pastorates in Baltimore, New York, Boston and Philadelphia. He was a well-educated man for his day, and was known as a fine orator who was much in demand for his powerful voice and splendid speaking ability. He was known at the time as "The Demosthenes of the West."

He must have been a very dedicated man to have left the comfortable work along the east coast for the middle western wilderness that was southern Indiana in the early 1800s. The only roads were buffalo traces, and streams had to be forded despite spring flooding. Paoli was one of the earliest points on the Charlestown Circuit. This was considered the roughest assignment in Indiana, so no circuit rider was assigned to the area for more than one year."

Beauchamp died in Paoli in 1824, possibly from pneumonia caused by exposure to the elements in the course of his duties as a circuit rider. His grave is on the north edge of what is now called the Old Paoli Cemetery.

Beauchamp’s death was the first recorded recorded in the Illinois Conference of the Methodist Episcopal Church journal of 1824 – the year of death and the year the conference was formed.

The Northwest Ordinance of 1787 had opened up westward expansion dedicated to freedom, intelligence and progress. On Feb. 3, 1809, Congress separated the Illinois and Indiana territories with Ninian Edwards, a Kentuckian highly recommended by Henry Clay became the first territorial governor.

Methodists were a part of those moving into the new territory. And while many were drawn to the promise of a new life and a new start, Methodists saw the frontier as a new mission field. While there were many perils, Methodists never wavered in their efforts to promulgate the gospel, organize religious societies and build houses of worship. They constantly pushed their itinerant efforts farther westward, ever keeping pace with the wide sweep of advancing civilization. Utilizing vast circuits of churches with pastors traveling by horseback, Methodism grew even though its circuit riders were exposed to murderous attacks, long and toilsome journeys and were commonly provided crude and meager accommodations upon arrival (Risley, 1920).

And so, in 1816, Hinde and McDowell -- in their quest to found a city on moral principles, that would enable them to carry out, in practical results what they believed to be the true ideals of the Methodist faith and teachings -- came from Chillicothe, Ohio. Hinde and McDowell were proprieters of the land, having purchased the land from Enoch Greathouse, and a third pastor, Rev. William Beauchamp, who was also a surveyor came with Hinde and McDowell in the capacity of plotting and selling lots and managing the settlement.

The Methodist Review of 1825 in Memoir of Reverend William Beauchamp,” of Mt. Carmel, Illinois gives the following: “Mr. Beauchamp, with his wife and family, left the 10th day of October, 1817, and arrived at the foothills of the Great Wabash on the Fifth day of November following, and took possession of his new settlement, situated in the (then territory) state of Illinois” (Heater).

The trio named the community, selecting a Biblical name – Mt. Carmel – signifying “the garden of the Lord” in the midst of the wilderness.

A code of municipal laws were prescribed that were rigidly puritanical and were largely molded after the old “blue laws” of Connecticut. Eventually, the rigidity became difficult, but at the time of their enactment, they were believed to be piously wholesome and beneficial (Risley, 1920).

So intent were these pioneers on propogating the gospel that by 1819, the Mt. Carmel Circuit, which encompassed a geographic area from Terre Haute to the mouth of the Wabash River with communities on both sides of the river in Indiana and Illinois. Charles Slocomb became the first circuit rider of this new enterprise, preaching salvation to the straggling settlers wherever they could be found.

The 1827 session was notable in that Peter Cartwright offered the suggestion which was embodied in a resolution and adopted by the conference, that a Methodist institution of learning be built which would result in the founding of McKendree College.  McKendree, the oldest college in Illinois, began in 1836 and graduated its first class in 1841.

During its formation, the citizens of Lebanon pledged the first $1,385 toward the project. Its first instructions were given Nov. 24, 1828 by Rev. Edward Ames, a personal friend of President Lincoln. He would later be elected bishop in 1852. In 1830, Bishop William McKendree donated land to infant school and it later was named in his honor.

Another connection to Methodist higher education came in 1844, when Rev. James F. Jaquess and his family moved to Mt. Carmel to teach in the Mt. Carmel Academy. There is little information about the Academy but it was located in “the seminary building” in Mt. Carmel. One of the original aims of Hinde and McDowell was to form a seminary to train young pastors on the frontier.

While Mt. Carmel Academy had no religious affiliation, it well could have been the successor to an early Methodist seminary in Mt. Carmel.

Jacquess, who was a licensed Methodist preacher, a chaplain in the Illinois Regiment and a member of the state legislature, spent only one year at Mt. Carmel Academy and then moved to Springfield where he was appointed to a church.