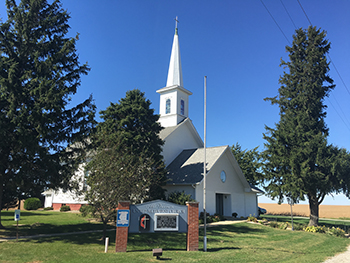 CHAMPAIGN -- Mt. Vernon UMC, located in east central Champaign County, marked its 142nd anniversary of the dedication of its building Aug. 14. However, members recently found old records that date the congregation back 175 years.  The first service of the Methodist Episcopal Church was held in Hezekiah Phillippe’s log home in 1841. Those early pioneers met in each other’s homes until 1874, when the current building was erected on land donated by the Phillippe family; their descendants are still members.

Church historian Phil Francis recently compiled a history of the church and congregation from the old records. Situated on the rural corner of 900 East and 2200 North, the church was originally a one-room building, and is one of the oldest active churches in the Champaign County. For many decades, the church had two entrance doors, one for the men and one for the women, and they were also separated inside by a center aisle in the sanctuary.  Over the years the double doors were reduced to just one, and the men and women began sitting together.

In 1990, an addition was begun on the front of the church, creating a new, spacious entrance.  Many renovations have been completed over the years, a major one as recently as 2011, which earned the church a “Place in History” Heritage Award by the Champaign-Urbana Preservation and Conservation Association (PACA).   The Heritage Awards are given by PACA to organizations and individuals for excellence in architectural preservation.

In his remarks at the Heritage Award ceremony, trustee Richard Rayburn, who guided the renovation, related that the church was post and beam construction still plumb and square after 140 years. When work began on the steeple, they discovered it was attached with 16 handmade forged nails.  “Not one of the nails had backed out, they were just as sound as the day they were put in,” he said. Rayburn speculated that with the amazing state of the structure and the reinforcements, “...if we happen to get the mother of all storms and it takes the steeple, a big piece of the church will go with it.”

The congregation, like the building, is also strong and active with families who go back generations; they come from area farms and small communities nearby such as Fisher, Mahomet, Dewey, Thomasboro, Rantoul, as well as newcomers from the nearby larger twin cities of Champaign-Urbana.