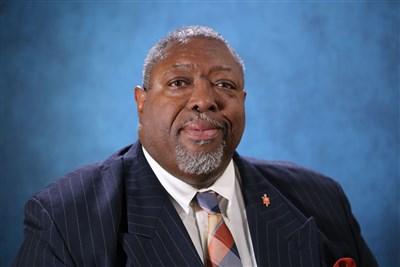 Bishop Frank Beard served as the senior pastor of Castleton United Methodist Church prior to being elected to the Episcopacy.  He has been elected five times to serve as a delegate to General Conference, and six times to represent the conference at Jurisdictional Conference.  He served as the chairperson of the Indiana delegation this year.

Delegation member and World Methodist Evangelism Institute Executive Director the Rev. Dr. Kim Reisman said, “I’ve worked with Frank in a variety of contexts – local church, Annual Conference, General Church. In all of these environments, he brings an important blend of firm conviction and pastoral grace. I believe that’s a crucial combination for leadership in our day.”

“Frank Beard brings a great deal of experience to the table as a leader of the local church, the Indiana Conference, and the General Conference. He is a godly leader filled with love and compassion for people. His leadership inspires me to be a better pastor and leader,” said the Rev. Tony Alstott, pastor of Wesley Chapel United Methodist Church and delegation member.

Bishop Beard has served in a variety of leadership roles at every level of the Church. Within the conference, he has been a district superintendent, and has been actively involved as a member or former member of the Board of Ordained Ministry, the Episcopacy Committee, the Church Development Committee, the Black Methodist for Church Renewal (BMCR), and the Large Church Initiative, just to name a few.

Ordained a deacon in 1982 and an Elder in 1985, Bishop Beard has served in many different ministry settings ranging from small to large churches, as well as having served as district superintendent of the former Kokomo and North Central Districts for eight years prior to his appointment to Castleton UMC in July 2012.

Bishop Beard has a strong sense of community and has extensive volunteer experience through the National Association for the Advancement of Colored People (NAACP), Youth for Christ, the Urban League, K-21 Foundation of Kosciusko County, Greater Warsaw Ministerial Association and more. He has also served as an adjunct professor at Grace College, Winona Lake, Ind., teaching at two of their correctional system sites.

“Dr. Frank Beard has been prepared by God to help lead the church in the 21st Century. His passion, genuine love of God, and commitment to the church is evident to all who look with a discerning heart,” said the Rev. Dr. Reginald Lee, pastor of Wesley United Methodist Church, Indianapolis.

Bishop Beard is married to Melissa Kay Riffell, and they have two daughters: Eleanor Lee and Emily Beard. They have two grandchildren: Maya and Elijah Lee. He is an avid outdoorsman, fisherman, and lover of sports. Other hobbies include cooking, antiquing and garage sales.