Grace UMC’s mission committee began discussing planting a garden in the late winter. Some church members had attempted to do a community garden in the past but were never able to organize enough space and volunteers. So the interested church members wanted to make a more coordinated effort this year. It was decided that since the church grounds did not have enough space to host a garden that members of the committee would petition the school board to use a 20ft. x 20ft. space at an unused school building that has been turned into a community center. The petition was granted and the process has fostered a positive relationship between the church and the school board.

Members of the committee struggled with deciding who would receive the garden’s harvest. Some felt that the garden should be a “teaching garden”, where only those working on the garden would receive produce. Other members wanted to offer the produce to the families receiving food from the summer backpack feeding ministry. In the end, there was enough for both—those who worked the garden could take what they wanted, and still several bags of produce were offered to the summer backpack feeding ministry each week.

Once the summer backpack feeding ministry ended the surplus produce was brought to the church and was placed on the welcome table. Church members could take what they wanted for themselves or to share with their neighbors. There was a jar for donations placed next to the produce, with all proceeds going toward next year’s garden.

The GUMC garden’s greatest challenges were with volunteers, as only 2-3 people regularly worked the garden, though they began with twice that number. Garden volunteers also worried about food waste and that recipients of the produce would not know how to prepare it, so volunteers included recipes and a note telling recipients where the produce came from and how to get involved with the garden.

Despite being small scale, the green beans, cabbage, eggplant, zucchini, squash, sweet potatoes, cauliflower, and broccoli flourished. The start-up costs were next to nothing: plants and seeds were donated, the city dropped off a few tons of topsoil for less than $20, and a bale of straw and recycled newspapers kept weeds at bay. An agreement with the school board was made about the garden committee offsetting the costs of water, but to date there has been no cost for water.

Next year, garden committee members would like to see more involvement with the community and youth, perhaps partnering with the 4H groups in town. Though there was a steep learning curve, the garden committee felt they made a significant difference to several families in need, making the hard work in the heat and sun completely worthwhile. 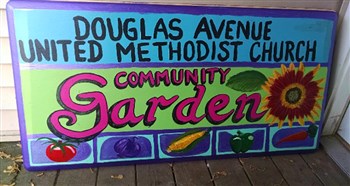 Over the last few years DAUMC became more intentional about increasing their presence and focusing on the changing needs of the neighborhood. Two years ago the church purchased a property adjacent to the parking lot and razed a home that was beyond repair. The church was undecided on how to use this new space until it was proposed to use the land for ministry, not a parking lot, and host a neighborhood garden. A focus group was organized by the church missions committee. Letters introducing the concept of a neighborhood garden were hand delivered to residences surrounding the church. The letter asked for those interested in the proposed garden to serve on a steering/planning committee. There was a tremendous response to the neighborhood garden proposal.

A steering committee was organized by members of the church missions committee, members of the congregation, and interested neighbors and was led by the Associate Pastor Margaret Jessup. A couple that lives next to the garden took the greatest amount of interest and soon led the efforts with church oversight. The church allowed the neighbors the greatest voice in planning and organizing the garden, and they selected the foods to plant.

The major focus of the garden was to provide healthy food to anyone in need--those who enjoy healthy food options and those who lack food due to economic challenges.  All who entered the garden were invited to pick and enjoy any food that they could use. It was not required to work in the garden to enjoy its bounty. Any produce that was not utilized by neighbors was given to those in need. Members of the church were encouraged to help harvest, weed, water, share, and enjoy the food.

Another focus of the garden project was to provide a peaceful space to fellowship with neighbors and be in nature. Outdoor furniture was donated and neighbors often sit in the garden and visit with each other. The space is sometimes used for weekly prayer meetings. One night a week is set aside as "garden night" to work in the garden and be in community with each other. It has been an excellent way to meet new people. Through the connections made through this year’s garden some new faces have joined in worship and a young person joined in on a mission trip.

The initial energy to prepare and plant the garden was inspiring. The children of the church and the children from an at-risk after school program helped plant and paint the raised boxes. People from the church helped the neighbors build the planting boxes, haul mulch and soil, and plant seeds.

Initial cost for the garden was approximately $2000 for lumber, soil, mulch, seeds, and plants. Next year’s garden will be less expensive as the boxes and soil will be used again. Two special offerings were taken over last 2 years with the purpose to use the funds to increase neighborhood ministries.

The greatest challenge of the garden was keeping the momentum and interest high during the hot weeks when the garden required great care and needed daily watering and weeding. There was also a learning curve about types of plants, planting schedules, and how to help plants thrive in hot and dry weeks. Looking forward to next year, more effort will be made to schedule more help and to continue to incorporate the garden into the life of the church. 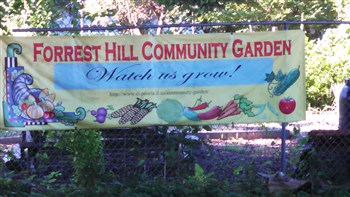 The garden came about when the neighborhood association expressed interest in having a community garden and FHUMC had land available for such use. The City of Peoria was interested in creating more green spaces within the city and invited Rev. Curt Keller to attend a meeting in which community gardening was promoted. The FHUMC trustees liked the idea of the community garden as it would reduce lawn maintenance costs and connect more to the community. At the city wide meeting FHUMC was chosen as a pilot garden project because the land was ready for immediate use and church and community members were ready to volunteer their time.

This group of church and community members took the lead in designing and beginning the garden. Though FHUMC has not added any members because of the garden, the garden has people coming to the church property on a regular basis in a positive way and has improved community ties. It has also reduced the money spent on mowing.

The church did not invest any money in the garden, just allowed the use of land. All the costs in developing the garden were borne by the gardeners. There is a fee of $20 per plot and those who own a plot tend and take the produce grown in that plot. Water from the church is used when needed. There is a rainwater collection system in the garden, though it is not always adequate. In dry months the church may see a few months of higher water bills. Some years the garden group has given the church a check to help offset those costs. However, the increase in water bill is still less than the cost of having the area mowed.

The garden committee has the freedom to oversee the garden. Each year there are improvements made to the garden, such as expanded rain water collection, better fencing, raised garden plots, and organic gardening methods. The relationship created with the garden will continue as long as the community wants to use it. 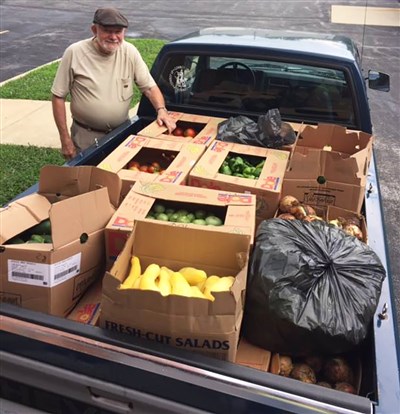 After a church-wide study of Change the World by Rev. Michael Slaughter, church members like Jan Denby and church leaders like Michelle Babb and Rev. Katie Gholson had a brainstorming session to address how the church could do more to bring God's kingdom to Earth. From those discussions a passion and interest in creating a garden that would feed people in the Metro-East area fresh produce was revealed.

The challenges were many. The largest were financing the start-up costs for the project, which spans 4 tenths of an acre on our church property, and getting enough volunteers to do the labor. Weed control was a problem and took three growing seasons to conquer.

But the garden’s successes have been amazing, feeding hundreds, maybe thousands, of people fresh produce. The average production from the garden is 13,000-15,000 pounds of produce per year. Fresh veggies are expensive, and many families simply cannot afford or secure them. A projected tally of the cost of what the produce grown at the community garden is worth is $22,500 per year (15,000 lbs x $1.50/lb = $22,500).

The garden’s annual expenses average about $2000-$2500. Some start-up money came from the congregation and a generous church supporter.  The garden committee sought a grant from Monsanto for $25,000. The grant was awarded and will be used for improvements and support for years to come.

Though the garden is in its fifth year, no two years have been alike, so the garden is reevaluated annually. The committee considers plant selection, takes feedback from the pantries, and revises picking schedules.  More involvement from the greater community, such as SIUE students or high school students that need community service hours, is a long term goal.

Perhaps the most rewarding part of the garden project is the year-end “banquet”, which consists of chili made with tomatoes, peppers and onions from the garden. All garden volunteers and the leaders from each pantry are invited to attend.  Each pantry representative is asked to share a story about some of their clients and how the food grown and donated impacts those families. The pantries thank the garden growers and workers, who hear how the work they’ve put in really does matter to their brothers and sisters in the community. These testimonies complete the circle for those involved with the work of the garden.

East Peoria Dayspring UMC, Jacksonville Grace UMC, Peoria Northwest UMC, Kankakee Asbury UMC, Blue Mound UMC, Springfield Grace UMC and Kumler Outreach Ministries have community gardens. There are likely more gardens around the conference of varying shapes and sizes. The gardens profiled here are simply a cross section of the different ways that garden ministries have been realized at churches in the IGRC.