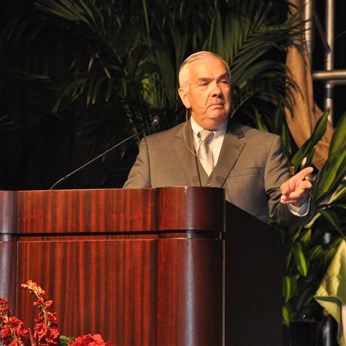 By Paul Black
PEORIA – Rev. Ed Weston said he wrestled with a number of different metaphors to describe retirement.

“Some talk about retirement as being recycled, but that leaves a lot to be desired,” he said during the Retiree Recognition Service. “After all, things that are recycled still go out with the trash; it’s just a different pile.”

The idea of “withdrawing from ministry” also doesn’t seem to strike a resounding chord because the Kingdom isn’t fully built yet.

Leave it to the 2011 World Series, a seminary experience at St. Paul’s School of Theology and a 2002 fire at Belleville Union UMC to reinforce the message for retirement, “See you tomorrow.”

“We are still going to be in your pews, attend your potlucks,” he said. “We choosing a different ministry. We’re stepping aside.”

Weston noted that the phrase “see you tomorrow” was the moniker which sports broadcaster Joe Buck said when the St. Louis Cardinals’ David Freese hit a walk-off home run to win the game, 10-9 and force a seventh and deciding game to the Series.

“I also heard a similar phrase in Seminary when I was on academic probation,” Weston said. “I went before a panel and in the end, the professor said, ‘I will see you in class tomorrow.’”

Following a 2002 fire at Belleville Union, which severely damaged a newly-completed addition to the church, Weston said he was asked by a TV reporter what he was going to do after such devastation.

“I told the reporter, ‘I am going to work tomorrow because evil hasn’t touched the church,’” he recalled. He went on to say that in the upcoming days, a sense of normalcy returned as the church sought out office and worship space for the transition period that lay ahead.

“See you tomorrow is God’s loud shout, ‘This world will not defeat God,’” Weston said. “God gives us tomorrow – either here on Earth or on the other side.

Because tomorrow is where God lives, where God’s Kingdom is and it is God’s gift to us.

In all, the retiree class of 2016 numbered 33 and were recognized for 959.75 years of service. One member of the retiree class, the Rev. Jennie Chin, died June 8, just prior to the start of Annual Conference.