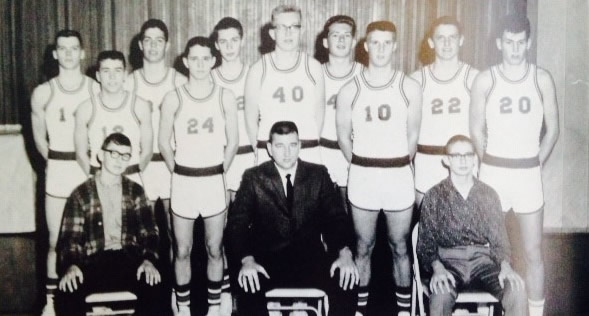 DWIGHT – Although Harry Statham has made his mark in college basketball, he did coach five years of Illinois High School basketball and his name will always be associated with one of the longest high school basketball games in the state’s history.

Terry Starks of Dwight scored a jump shot in the final seconds of the fourth quarter to tie the game at 62-62 and send it into overtime.
Reddick was highly regarded, having won back-to-back district championships under former coach Gary Johnson, including a 27-1 mark in the previous year, losing in the Regional semi-final to Pontiac.

“Reddick had a good team that year and they had some size,” Statham recalled. “At that time, every period opened with a jump ball and they would control the tip. They proceeded to play for one shot, and seven straight periods, they missed the only shot taken in the overtime.”

Finally, in the ninth overtime frame, Dwight took the opening tip and went in for a go-ahead basket. Dwight’s Byron Anderson, who failed to score in the regular game, and teammate Al Mortenson began hitting their shots, combining for 12 of Dwight’s final 14 points to win the game, 76-72.

The game, which lasted two hours and 25 minutes and with nine overtimes, stands as the Illinois state record for the longest high school basketball game. The national record, however, set on Feb. 29, 2012, was a 13-overtime thriller which Boone Trail prevailed over Angier in a North Carolina boys’ prep battle.

Reddick, under first-year coach Harlan Smith, finished 17-9 that year and Dwight completed the 1964-65 season at 8-14. Statham would coach one more year at Dwight guiding the team to a 14-11 mark in 1965-66 – the only season where Statham’s high school teams finished above the .500 mark.