The fields are ripe for the harvest 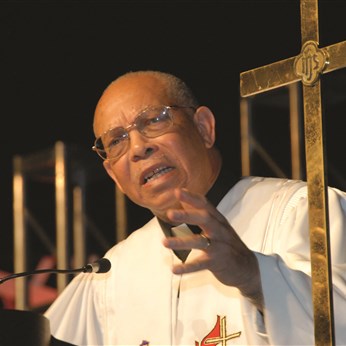 By Paul Black
PEORIA – Bishop Jonathan D. Keaton reminded those gathered at the 2016 Annual Conference that God uses some of the most unlikely people to help with the harvest.

In the opening worship, Keaton wove a tapestry of images based upon the story of the Samaritan woman at the well as the backdrop to punctuate the conference’s theme, The Fields Are Ripe for the Harvest.

“Society connected the woman at the well with a lot of negative names in the first century --half-breed, polytheist, in love with marriage and cohabitation, despised, second class citizen and drawer of water,” Keaton said. “Not Jesus. He saw her as a woman to be valued and respected.  They talked about life and faith.  Plus, Jesus expressed his willingness to give her living water.  Moved by his presence and person, the woman at the well brought a number of people from Sychar to Jesus because of her personal testimony.”

Keaton said because of this harvest, numerous scholars and theologians have concluded that the woman at the well was the first evangelist in the New Testament.  “Best of all, our Lord took a laywoman, who had five husbands and admitted cohabitating with another, and gave her a historic role in his church,” Keaton added. “One more time, Christ brought a woman of low estate to a high place of prominence in scripture that time cannot wash away.”

After acknowledging the decline of United Methodism in the United States, Keaton noted that the worldwide membership of the church has grown to 12.3 million or a 24 percent increase over the past 10 years. Membership numbers are shifting globally with growth in Africa and Asia with decline in the United States and Europe.

“In the past 50 years, Methodists in North America have been losing members,” Keaton said. “Causes vary depending on the observer. If one identifies reasons where opinions seem to be of one mind, here are familiar justifications – no baptisms, no confirmation class, no new members received by profession of faith and a steady procession of funerals. Another bishop is not making the right appointments. Another pastor and/or their family have issues. Still another debate on the church’s stance on human sexuality has remained a hot issue since 1972.”

Keaton said the John 4 text questions our so-called dilemmas. “We dutifully articulate the mission of the church driven by the belief that sheep are out there. We just have to go catch them,” he added. “Do we really believe that ‘the fields are ripe for harvest.’”

Even as the United States shows concern over the loss of churches and Christians, Christians are also diminishing in the Holy Land. Quoting Dr. Amnon Ramon, Christians living in the Jewish state has decreased by 50 percent since 1946.
“Over two thousand years ago, Christ’s new movement faced the same dilemma we face today,” Keaton noted.  “His new movement had little or no impact on Samaria.  Why?  At first, no one made a move to evangelize the Samaritans.  We do that all the time.  We do not speak to them.  We avoid eye contact with them.  We do not like their smell, their money, their politics, their theology or culture.  We’re stuck.”

Keaton summarized the stuck-ness and how it parallels modern day.

Jews had no dealings with Samaritans. “The woman at the well couldn’t believe that our lord did not know the first law.  Intermarriage had been forced up them by a host of conquerors; Rome being the latest,” he said. “Neither she nor Jesus had anything to talk about.

“Other divides separate the people of God too.  Black lives matter; the role of Methodists in the Sand Creek Massacre of Native Americans.  Who was responsible for 911? There are ongoing battles between North and South Korea, the U.S and Cuba, theological battles on guns, human sexuality, climate change, women preachers, electing bishops ad infinitum.  Doing the same old thing, we get stuck,” he said.

Jews and Samaritans had theological differences.  “In a bitter squabble over the temple where God resides and what books form the Hebrew Bible, no love was lost between Jew and Samaritan,” Keaton said. “(For us today), we got stuck on Rule 44 at General Conference. Before it was defeated, nearly three days of rancorous debate held up work on mountains of legislation.  What happened?  Responding to a request of the 2012 General Conference, the Commission on General Conference created an alternative to Robert’s Rules of Order with respect to controversial legislation.  Once the Commission declared Rule 44 could be used to deal with legislation related to human sexuality, it was DOA (dead on arrival).”

Jews and Samaritans erected barriers and boundaries to minimize the building of relationships. “Personal discourse between the two was strictly forbidden, especially between a non-Jewish woman and a Jewish man,” Keaton noted. “To maintain those boundaries, Jews never traveled between Judea and Galilee by going through Samaria.  Custom and culture directed them to cross the Jordan in Judea and travel on the other side of the Jordan till they reached Galilee.  Then they would re-cross the Jordan into Galilee.  Given that set of circumstances, I understand how Christian Jews concluded the fields were not ripe for harvest in Samaria.”

John Wesley experienced a similar awakening when he left the high church pulpit and began field preaching.  “I could scarcely reconcile myself at first to this strange way of preaching in the fields, of which he set me an example on Sunday,” Wesley wrote. “I had been all my life (till very lately) so tenacious of every point relating to decency and order that I should have thought the saving of souls almost a sin if it had not been done in a church.” Preaching in the field, Wesley’s worship attendance jumped dramatically.  Audiences of five hundred, a thousand, fifteen hundred and three thousand flocking to hear him were typical.  Field preaching resulted in a dramatic increase in Methodists.

Keaton said Christ discerned that his ministry was stuck.

“Like a typical Jew, our Lord learned to travel to and from Jerusalem and Galilee avoiding Samaria and Samaritans.  Yet, something changed when he focused on his mission to preach good news to the poor and deliverance to the captives.  Something changed when our Lord laid out his mission and ministry in John 3:16,” he said. “To talk about how God so loved the world and emphasize that whosoever believeth in him should not perish was to come face to face with the Jonah question - why won’t we go to Samaria?  Why am I avoiding ministry in Samaria? They are a part of my mission and ministry.  On that significant day when Jesus’ journey took him north to Galilee, he ignored what convention had taught him-take the Transjordan route. Instead, Jesus took the route through Samaria.  Jesus was clear.  He had to go through Samaria in order to minister to persons not like him.”