The many stories of the Coal City tornado

(Editor’s note: The following is a transcript of the Laity Address delivered by IGRC Lay Leader Ken Miller, June 9, 2016). 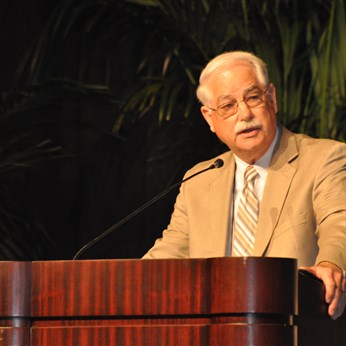 I don’t think I will ever forget where I was. It was an off day on the schedule of the baseball team that I work for and so I worked my usual day at the office and started home about 4 p.m. On the way home, I heard weather reports of possible strong storms approaching our area, but I didn’t pay too much attention because I had heard those reports before, and in most cases, they had not turned into anything.

Once I arrived home, I turned on the news and the reports were coming in about possible tornadoes in the area. It was still too early to tell how severe they would be and what direction they would take.

As the evening wore on, the storms moved closer and closer to Coal City, and it became evident that we could be in for trouble. I have been through several tornadoes in my life without experiencing major damage so, while I was beginning to be concerned, I wasn’t frightened.

Finally, around 9 p.m., my wife returned from a meeting, and by then, the reality of a tornado hitting us was becoming more and more real. I suggested that, while not panicking, we probably should go down to our crawl space just to be safe, especially since the warning sirens in town were going off. We stayed in the crawl space until the “all clear” sounded.

Unlike some tornadoes I have been through, we never heard the roar or experienced a lot of wind by our house. Once out of the crawl space I realized that we had no power, and when I looked out our back door, I saw the flashing lights of an emergency vehicle over at our church. My immediate thought was that something had gone wrong at the church. I told my wife to go to be and that I was going to go over to the church and make sure that everything was OK.

I was totally unprepared for what I saw when I drove into the parking lot. There were several emergency vehicles in the parking lot (the number would eventually be in the 20’) with their lights on, and as I parked and walked up to the front door, I heard several generators working to provide emergency electricity.

When I opened the door, there were several church members there along with several families who were homeless because of the storm. Because of the first tornado (in November 2013) that we experienced, preparations were already in place and being executed. The rest of the night, the next morning and afternoon were all a blur as more people arrived, and the news of the extensive damage began to filter in.

I have to say that the volunteers, most of them our church members, were amazing. Many of them went without sleep for as long as 48 hours to help those in need. Thank goodness for strong coffee!

The story doesn’t end there. I would like to share the rest of the story with you. It’s a story that amidst the chaos has a happy ending. It’s a story about a community that refused to allow adversity to defeat it. A community that reached out in a time of need and joined together to make itself stronger and about a church that was right in the middle of it all.

It’s a story about two dedicated pastors – one who was leaving after a year named Wally Carlson and one who was replacing him named Brad Shumaker – both of them doing whatever necessary to help out and ease the community pain.

It’s a story of a little 5-year-old girl, who had just lost her house, climbing up on Pastor Wally’s lap, and when he asked her how she was, she replied, “Let’s see. My Mom and Dad are OK, my brothers and sisters are OK, my dog is OK, so I’m OK, too.”

It’s a story of a recently married young lady who had returned home for a two-week visit coming to the church for help and giving her clothes to another young lady whose house had been destroyed so that she could attend a conference.

It’s a story of a well-planned Vacation Bible School that was to take place at the church that week. After meeting on Monday and not being able to meet on Tuesday because of the storm, it was moved to another church in the community and finished out the week with 137 children. The Bible School was topped off with a visit from District Superintendent Leah Pogemiller, Conference Director of Communication Ministries Paul Black, and a very special visit from Bishop Keaton, who shared a message of hope, played on the piano and sang Jesus Loves Me with the children.

It's a story about our own Bunny Wolfe coming and spending several days with us, working side-by-side with our church family and the community to ease people’s burdens.

It’s the story about endless volunteers including the Chicago Bears; my team, the Joliet Slammers, several athletic teams from neighboring towns, area churches and church groups from our conference, and many more.

It’s a story of a church kitchen that turned out two and three meals a day for six weeks – a total of 20,000 and never turned anyone down that was in need.  When it looked as if we might run out of food, we always had someone show up with more – like the Shoemaker and the Elves.

It’s a story of endless gifts of donated food, money and prayers to help us through the tough times.

It’s a story of quick response, an open church and a community pulling together. Some would say that we learned from the first tornado, and that could be true, but the fact that we had a good plan cannot be overlooked.

It’s the story of a young veterinarian who volunteered his time for any one whose pet had a problem and actually did surgery on an injured dog. Also a group called Therapy Dogs International brought therapy dogs to our church.

It’s a story of a young man from Chicago nicknamed Santa Sam, who started a foundation that brought Christmas presents to the displaced children so that they could have a Christmas.

It’s a story of a Long Term Recovery Committee that has given out more than $350,000 in aid to the victims and is still meeting to help people.

It’s a story of Commonwealth Edison and a local nursery helping the recovery effort by donating and helping to plant 500 trees in Coal City alone.

It’s also the story of two special people out on the floor our conference named Larry Bennett and Karen Hart, who worked endlessly to make sure people had what they needed.

So this is the story of a community that almost a year ago suffered a disastrous stage 3 tornado. But out of the disaster came the spirit of a community that is still picking up the pieces but with a strong determination to see it through to the end. It’s also a story of a church that not only read Matthew 26, but who also believed it and lived it – a church that was not afraid to heed God’s call for help.

At a family dinner prior to the tornado, I had expressed my concern that I didn’t think people responded to emergencies like they use to in the past. People were just too busy with their own things, and the sense of community was being lost. Boy, was I wrong! God, in his infinite wisdom, slapped me right across the face and showed me how wrong and foolish I was. I learned a valuable lesson about community, love, friendship and people helping people – a lesson I will never forget.

(Note: The Laity Address ended with a reading entitled What Will Matter by Michael Josephson. The full text of the reading can be found by visiting http://www.appleseeds.org/What-Matters.htm)