This is how you pray: 'In Jesus' name' and I want to know about it 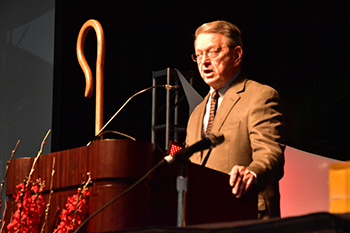 PEORIA – The Rev. Dr. Terry Teykl has found great power in the name of Jesus.

“If you get a group of people praying on the same scripture, there is power when you pray in the name of Jesus,” he said during Friday’s Morning Manna. “When you are agreeing about it and are on the same page, inviting the Holy Spirit to take charge, great things happen.”

Teykl related his experiences over the past 30 years and how prayer changed things. Using three stories, Teykl was able to paint the picture of effective prayer.

“This is how you pray: In the Jesus’ name…and I want to know about it,” he said.

On Good Friday 1988, a parishioner named Dale was going to quit church. He had issues of rage and had a gun. Teykl said he asked to pray for Dale “in the name of Jesus,” and the rage left him.
He gave Teykl his gun, saying “I don’t need this anymore.”  Teykl says he still has the gun as a reminder of the battle we face as people of prayer.

“We are at warfare,” Teykl said. “There are spiritual forces that torment the people of God. But you pray ‘in the name of Jesus,’ even those forces take note.”

There was Amy, who always cried when she heard the name of Jesus. She told Teykl, “I gave my soul to the devil in return for being able to shoot up,” she said. “It was only because of someone who rescued me that I am here today and when I hear his name, I cry.”

Teykl said it has affected his own then 43-year-old son who had a stroke. As the son prepared for surgery, Teykl prayed for him. The doctor came out to talk with the family after surgery and said, “I was not able to find the tumors that caused the stroke.”

And the doctor then asked, “Will you pray for me?”

“This is how you pray – In Jesus’ name because all hell takes note and the angels stand up, and I want to know about it,”