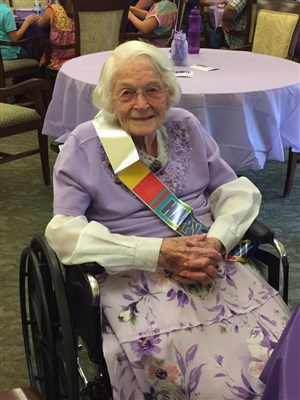 By Paul Black
MARION – Retired pastor, the Rev. Mary Erwin celebrated her 100th birthday Oct. 3 at the care facility where she lives in Marion.

While the 100th birthday is a milestone in and of itself, Erwin was a trailblazer for women in ministry as the Illinois Great Rivers Conference found out when she was presented a Certificate of Completion for the Five-Year Course of Study in 2006. What makes this trailblazing was that she completed the Course of Study 51 years earlier – in 1955 – a year before women were granted ordination rights by the General Conference.

“The licensing process of this pioneer in ministry reflected the difficulty of women clergy in that it was issued in her husband’s name, Mrs. Carroll Erwin,” said Bishop Sharon Brown Christopher, as she related Erwin’s story to the 2006 Annual Conference. “It was a different era and a different time. Even grade reports were issued to ‘Brother Mary Erwin.’”

Erwin completed her educational work and was ordained a local deacon in 1953 and local elder in 1955 through the Conference Course of study program that existed for supply pastors at that time.

Despite completing the class work, Erwin was never given a diploma presumably because she was a woman and graduation occurred prior to the General Conference action. After Erwin’s daughter told her pastor at Creal Springs UMC about the oversight, the Rev. Tim Woodard contacted Bishop Christopher and told her the story, providing her documentation from the Conference Board of Ministry.

Christopher contacted Bishop Lindsey Davis of North Georgia, who at the time, served as trustee for Emory University, asking that he look into the matter. After contacting the General Board of Ministry, he was told that the Board of Education of The Methodist Church (the predecessor board to the General Board of Ministry) did not assume responsibility for the Course of Study until 1960. Each theological school organized its work according to the curriculum prescribed in The Book of Discipline.

A native of Kansas, Erwin heard God call her to ministry during a revival service as the congregation sang I’ll Go Where You Want Me to Go.

“My first exhorter’s license (issued in 1949) was made out to Mrs. Carroll Erwin,” Erwin said. “They wanted me to use my husband’s name, but later I insisted I wanted to use my name. Very few were willing to help a woman pastor much less accept having one serve their congregation. But my husband and family’s loving support and loyalty was a great help.”