Viola UMC in the Spoon River District held a grand opening of its new food pantry May 23. The ministry is open two times a month and serves approximately 45 persons and is the third location due to the ministry’s growth.

The former parsonage garage was remodeled to become the new location for the food pantry as there are no stairs to navigate and the building is situated at ground level. 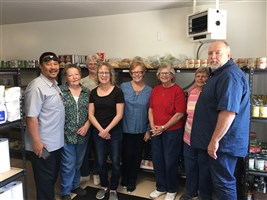 In 1980, the church started a food pantry at the suggestion of then pastor, Lorraine Martin. Martin began collecting non-perishable food items from the membership, purchases she made at Sav-a-Lot, and donations received from other local churches.  In its earliest beginnings, shelves were built in the pastor’s office to contain the food items and to serve the needs of families in the community.
In 1993, the Food Pantry was moved to the Fellowship Hall entry.  New walls and shelves were built, along with the purchase of a new freezer to hold meat products, that had not been given out before.  As it began to outgrow this location, a side and upper closet were used to place more groceries.  New donations were received from the local Boy and Girl Scouts, Midwest Food Bank, Morrisons Market, HyVee and Riverbend Food Bank.

The latest remodeling project began in January and was completed four months later.