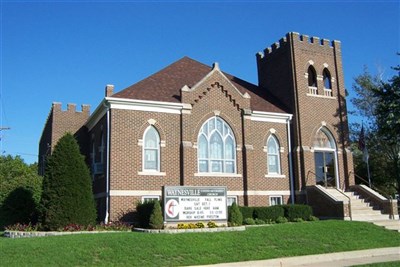 Rev. Burt McIntosh, pastor from 1954 to 1958, delivered the message. The history of the church was presented as well as honoring and remembering members and pastors who have served our church.  Past and current ministries were also shared to a full sanctuary.  Special music was provided. Old songs were sung and memories were shared through audience participation. An enlarged and newly-framed picture of the church as it was being built in 1916 was on display.  A group photo of the congregation was taken on the church steps at the conclusion of the service.

The present church was a novelty in construction in 1916.  It was built on a plan called "The Akron Plan." The church building was constructed of Danville Rug Brick, trimmed in Bedford Stone, and covered with a slate roof.  It was lighted with electric lights from a plant in the basement and the steam heat was furnished by the village water works plant. The total cost of the church was $15,519.98.  It was paid for on the date of dedication -- Aug. 27, 1916.

The following quotes were taken from a newspaper article written about the church in 1916: “A magnificent House of Worship;” “the structure is the pride of the village in architecture, an ornament to the community and the work and sacrifice which its erection entailed but adds to the value in the eyes of the world;” and “Christian fellowship, which should ever exist between churches, was made manifest when members of other churches added their names to the long list of subscribers.”

The church bell, still in use, was made in 1871.  The church is the fourth Methodist Church to be erected on this same site, the first one in 1834.  Prior to that, church services were held in homes as Methodism actually came to Waynesville in 1826.

The 100th anniversary celebration was held in conjunction with the Waynesville Fall Fling, “Growing Up in the ‘Ville.”  There was a display of memorabilia in the church basement on Saturday, August 20th during the Fall Fling.  A breakfast buffet was provided to the community on Saturday morning and pie and ice cream followed the parade on Saturday afternoon.   Lunch was provided following the rededication service on Sunday.