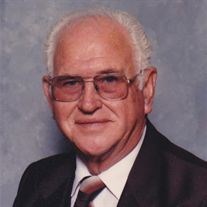 He was born August 18, 1925, in Nashville, IL; son of John and Edna (Ragland) Pruehsner. In 1944, he married Evelyn Toombs of Anderson, IN. They were married for 70 years. Leslie, since the age of 17, was a Methodist Minister and served through “many” churches until he retired in 1988. He continued to minister to those in need up until his last days at the Veterans Home in his bed.

He has lived at the Anna Veterans Home since January of 2011. He was provided with the best quality doctors and nurses; the whole staff also came to his needs with so much love and care. He loved them all like family.

The family of Leslie would like to thank the wonderful staff at the Anna Veterans Home who made his past 4 ½ years so very comfortable.

God did bless our family with moments of incredible strength from “Dad”. His sickness never wavered his patience. He would always say “thank you” to his nurses and give them his smile even through his hurting.

Leslie proudly served his country in the United States Army. He was drafted into the Army in 1943 serving in Central Burma, India Burma, and China Offensive. He joined the Army Reserves in September 1948 and retired a Lt. Colonel Chaplin in 1985.

He was preceded in death by his parents, John and Edna Pruehsner; sister, Norma Giddings-Kessler.

Funeral services will be Tuesday, April 21, 2015 at 11:00 am at the funeral home with Rev. Bill Minor and Rev. Brent Gordon officiating. Interment will follow at Anna City Cemetery with military honors by VFW Post 3455 and Illinois National Guard.

Memorials in honor of Leslie may be made to the Anna Veterans Home Activity Fund, United Methodist Church Preacher’s Aid Society and Tamms Methodist Church and will be accepted at the funeral home.