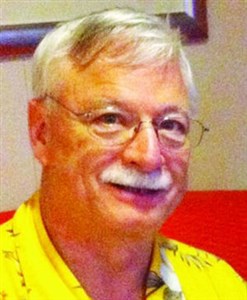 Dennis Ray Sparenberg was born Feb. 13, 1950, in Watseka, the son of Wayne and Myrtle Sparenberg. He went to his eternal home in Heaven on Sunday morning (April 26, 2015). His body was cremated, as he wished.

Dennis attended Clifton Central High School, graduating in 1968. Then, as a young man and father, he found love in life by being an active leader in many community organizations. He coached his daughter, Karen, in baseball and cheered for her at high school track meets. Dennis was the Scoutmaster for Troop 310. He led both of his sons, Keith and Kyle, through many adventures, including a trip to Philmont National Scout Ranch in New Mexico. Dennis cheered at cross-country meets, basketball games, softball games and choral events for Kari and Kristin.

He also was a successful entrepreneur. He started Door Master's Inc., which grew its business across much of the greater Chicago area. Suddenly, in 1993, the family was faced with the early celebration of life for Dennis' youngest son, Kyle Sparenberg (1977 to 1993). God called Dennis and family to Red Bird Mission in the Appalachian Mountains of southeast Kentucky. Dennis was the work camp director, where he made a positive impact on hundreds of lives. He improved the work camp environment and program. This allowed more work teams to come, which led to more local people being served. He also became a certified lay speaker. This missionary work flowed through to other christian organizations, as they became members of River Valley Christian Fellowship. In January of 2014, Dennis and his wife, June, moved to Texas. He became the camp director at Forest Glen Springs Christian Camp near Rosebud, Texas. In Texas, Dennis and June were able to spend free time with family, enjoying their grandchildren's school events and special moments in their lives.

Celebration of Dennis' life will be at 5:30 p.m. Friday at Forest Glen Springs Christian Camp, 557 County Road 331, Rosebud, Texas. It will be held at Lake Winniwaca.

A celebration of his life will also be held at 11 a.m. Saturday, May 9, 2015, at River Valley Christian Fellowship, 800 Cardinal Drive, Bourbonnais. It will be in the sanctuary.

Memorials may be made to Forest Glen Christian Camp in Huntsville, Texas or Red Bird Mission in Beverly, Ky.