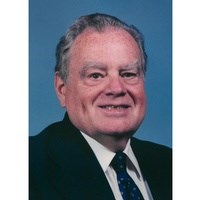 He was born Nov. 1, 1923, in Carlinville to James Russell and Ruth (Van Meter) Barnett. A brother, Donald Barnett, preceded him in death.

He graduated with a bachelor's degree in commerce from Saint Louis University in 1949. While attending Saint Louis University, he was called to preach and then attended and graduated from Asbury Theological Seminary in Wilmore, Ky. He served several churches in all five districts of the former Southern Illinois Conference of the United Methodist Church.

His full-time ministry spanned 37 years, serving five churches in Ohio and 24 churches throughout southern Illinois. He retired from preaching in 1986. After retiring, he began volunteering as a chaplain at the United Methodist Village in Lawrenceville, then also served at Lawrenceville Otterbein and May Chapel for four years.

After moving to Elkville in 2003, he served Elkville UMC and Hallidayboro UMC for 13 months.

Searby Funeral Home in Du Quoin is in charge of arrangements.

He is also the father of an IGRC active pastor, The Rev. James E. Barnett, who serves at the Pinckneyville UMC. Condolences may be sent to Jim at PO Box 86, Pinckneyville, IL 62274-0086.