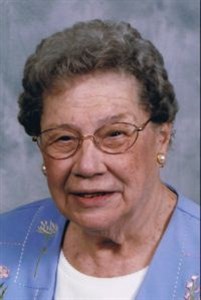 Helen M. Metzger, 96, of Galva, died Wednesday, May 13, 2015, at Marigold Rehabilitation and Health Care Center, Galesburg.  Funeral services will be held at 11:00 a.m. Tuesday, May 19th, at the Galva Chapel of Stackhouse-Moore Funeral Services.  Rev. Martin Gutzmer will officiate.  Burial will be at the Galva Cemetery.  Visitation will be one hour prior to the service at the funeral home.  Memorial may be made to the First United Methodist Church.

She worked for 24 years at Mascall’s Floral Shop & Greenhouse in Galva.  Helen then worked at Kneen’s Department Store in Galva and at Hillside Florist in Kewanee.  Her memberships included the First United Methodist Church, Galva, the United Methodist Women and the Martha Circle, the Married Folks class, and the Galva Senior Citizens.  She had taught the kindergarten class at church for 24 years, was in the Bell Choir for 24 years, and headed Flower Committee for 35 years.  Helen enjoyed gardening, flowers, and Scrabble.