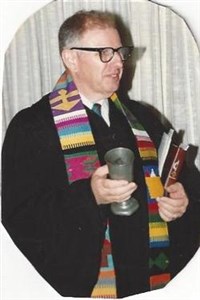 Rev. Kenneth Warner Goodell went to join the other saints in heaven on January 13, 2018. He was born in Winfield, Kansas on September 9, 1930. In 1937 his family moved from Kansas to Illinois where his father served as minister. On June 22, 1952, he was united in marriage to Mary Worrall of Jacksonville, Illinois. Ken prepared for ministry in the Methodist Church by attending Wesley Theological Seminary in Westminster, Maryland. While attending seminary he served the Methodist Church in Buckeystown, Maryland. While there, two sons were born, Mark and Jerry. After seminary, he spent a year at Boston University in Old Testament Studies. The family lived in Grasmere, New Hampshire where he served Grasmere and Goffstown churches.

In 1957, he returned to Illinois to serve churches in Raymond, Joy, Ashland and Galesburg. In 1976, he was accepted into the chaplaincy program at Memorial Hospital in Houston, Texas. He then served churches in Newgulf, Boling, Lufkin, Pasadena, Bay City and Markham, before retiring in 1992. After a year in Galveston, he accepted a call to Grace United Methodist Church in Baytown, Texas as Associate Minister of Pastoral Care. He and Mary moved to Baytown in 1994 and continued to serve at Grace church until 2003. He continued to be a part of the Baytown church until his move to Wharton in 2015.

During his ministry, he directed church camps for youth for 28 years, both in Illinois and Texas. He was also active in the Family Ministry in both the Illinois conference and Texas conference. He was on the Archives and History Commission both for the Conference and the State Society. He also served on the Golden Cross Committee, helping with health care ministry. He was very proud to have helped three pastors come into the ordained ministry. He said his two personal achievements were: 1) being a 20-gallon blood donor and 2) being a railroading hobbyist, collecting a library of historical books and building a collection of train memorabilia. He was glad to have lived long enough to see the Chicago Cubs win the World Series.

He was preceded in death by his beloved wife of 58 years, Mary. He was also preceded by his parents, Rev. Roy and Mabel Goodell and brother, Rev. Dr. David Goodell. He is survived by sons, Mark and his wife, Barbara of Wharton and Jerry of Bloomington, Illinois; nephew, Rev. Tom Goodell and his wife, Sherry of Pontiac, Illinois and niece, Laura Evans of Savannah, Georgia. He is also survived by close friend Evangeline Williams from Baytown, Texas.

He loved serving his churches and, most recently, attending the Agape class at Wharton FUMC. Visitation will be on Wednesday, Jan 17th from 5-8 p.m. at Wharton Funeral Home. Funeral Services will be 10 a.m. on Thursday, Jan 18th at Wharton First United Methodist Church with Rev. Dr. Kelly Krone officiating. Burial will be held in Baytown on Friday, Jan 19th. Memorials can be made to First United Methodist Church, Wharton. Funeral Services are under the direction of Wharton Funeral Home. Condolences may be left at whartonfuneralhome.com