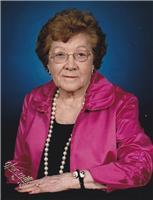 Beulah Jones Pruett, 94, joined the saints in Heaven on Thursday, October 10, 2013, at home in Kyle, Texas.Services will be held at 2 p.m. on April 4, 2014, at First United Methodist Church in Vandalia, with the Rev. Dr. Roger Grimmett officiating. Prior to the services, an inurnment of her ashes will be held next to her beloved husband in Illinois Evergreen Cemtery in Kinmundy. Memorials: Television Ministry or Church History Committee of First United Methodist Church in Houston, Texas, or Odyssey Hospice of San Marcos, Texas.Beulah was born in Pope Township, Ill., to Grace and Cecil Jones.The second of five children, she learned excellent culinary skills from her mother. Throughout her life she took pleasure in cooking family dinners enjoyed by loved ones around a well-set table.
At a time when a high school education was not common for girls, she left her rural home and moved to another county in order to earn her diploma. There she met her future husband Walter B. Pruett at a Kinmundy Methodist Church youth meeting. It was a partnership between two starry-eyed youth and the Methodist Church that would last a lifetime. They married in January 1938, and had two daughters, Patricia Louise and Peggy Lou.
Following completion of her husband's seminary studies, they moved to West Virginia to be part of The Home Mission Board and Save the Children Federation. During the early 1940s, as a team, Beulah and Walter B. were selected by Eleanor Roosevelt to serve in the resettling of miner families in the Appalachian Mountains. It was an opportunity to help those in impoverished conditions to improve their housing, education and way of life.
In January 1943, they returned to Central Illinois where, until her husband's retirement in 1982, they would serve many churches in the Central Illinois Conference of the United Methodist Church. Beulah worked side by side with her husband as they served their Lord together. During their 40-plus years of ministry, Beulah taught Sunday school, led worship messages for children, was a tireless volunteer and a great prayer warrior.
After moving from Illinois to Houston, Texas, Beulah became a member of First United Methodist Church in Houston and the Epworth Sunday school class.
She loved the music of Sunday worship, the fine messages from the ministers and the many friends in her Sunday school class.She cared for their daughters single-handedly while her husband was at war. She concentrated her energies on raising polite, kind, faithful children while he concentrated on caring for soldiers during World War II as a U.S. Army Chaplain.
Beulah was a gifted homemaker who sewed clothes for her daughters, to be certain they were always dressed appropriately for any occasion. Additionally, she was a very talented interior decorator and often traveled to help a family member or friend decorate a new home. Creating a warm, inviting and happy gathering place was her forte.
Her greatest contributions live on in her children, grandchildren and great-grandchildren.Beulah led a life of character, integrity and faithfulness. She taught her family the importance of gratitude, even during times of trial. No visit was without embracing and sharing wisdom. She was surrounded by loving family members when she took her final breath. After an afternoon of worshiping with hymns and scripture, she happily answered God's call home. She laughed. She lived. She loved – always.
Beulah is survived by daughters, Patricia and her husband Robert Provart of Loudon, Tenn., and Peggy and her husband Carl Gilson of Houston, Texas; brother, Cecil Jones Jr. and wife Louise; sisters-in-law, Jean Pruett and Audrey Jones; grandchildren, Michelle Provart Menefee, Celeste and her husband Raja Gosnell, Mark and his wife Kelli Provart, and Shannon and her husband Travis Hightower; great-grandchildren Dillon and Devin Menefee, Emily, Bradley, Cayley and Audrey Gosnell, Zachary and Sophia Provart, and Tanner and Caitlin Hightower; and many cousins, nieces, nephews, great-nieces and great-nephews.
She is preceded in death by her husband Walter B. Pruett; parents, Grace and Cecil Jones; and siblings, Velma Leith, William Jones and Robert Jones.