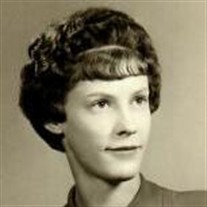 Alice Faye Morgan, 75, died at 2:33 a.m. Thursday, February 8, 2018 at Fountain View Manor in Granite City. Born September 16, 1942 in Du Quoin, IL she was daughter of Milton and Lessie (Mulligan) Ahlers. Mrs. Morgan was a homemaker and she enjoyed collecting and making dolls. She was a member of the Emmanuel Free Methodist Church in Alton. On July 2, 1961 she married David P. Morgan in Du Quoin, IL. He survives. Also surviving is a son, David Wayne Morgan (Julie) of Alton, a daughter, Kimberly Lynette Caraway (Andy) of Nashville, TN, seven grandchildren, Holly (Tony), Lexa (Jeremy) Aaron, Shane, Samuel, Elijah, and Hannah, one great grandchild, Bentley, one brother, Bill Ahlers (Carolyn) of Moro, a sister, Delores Williams (Dale) of Texas and a sister-in-law, Imogene Ahlers of Bethalto. Along with her parents, she was preceded in death by a brother, Allen Ahlers. Visitation will be from 10:00 a.m. until time of Memorial service at 11:00 a.m. on Monday, February 19, 2018 at Emmanuel Free Methodist Church in Alton. Reverend Mark Scandrett Officiating. Memorials may be made to the Alzheimer’s Association. Gent Funeral Home in Alton is in charge of arrangements. Online guestbook and information may be found at www.gentfuneralhome.com