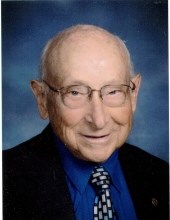 A memorial service to celebrate and honor Don’s life will be held at 12:00 p.m. on Saturday, March 24, 2018 at the Zion Chapel United Methodist Church, Boody, IL. Visitation will be from 10:00 a.m. until service time at the church. He will be laid to rest at Zion Cemetery. Memorials can be made to the Preacher’s Aid Society or to Zion Chapel. Dawson & Wikoff Funeral Home North Chapel is assisting the family with the arrangements.

Don was born on January 30, 1926 in Champaign County, IL the son of Dr. Lloyd Hill and Jessie (Fletcher) Wise. He married Jennie Evans Pistorius on December 28, 1954. He first earned his B.A. from the University of Illinois-Champaign where he was a member of AKL Fraternity and the Fighting Illini Marching Band. Reverend Wise earned a Master’s of Divinity from Garrett Evangelical Theological Seminary and then began his career in the United Methodist Church. His first assignment was at the Zion Chapel United Methodist Church, Boody, IL where he met his wife. He then went on to serve the United Methodist Church in: Arcola, Farmington, Springfield, Farmer City, and Aledo. Don was proud of his association with the YMCA, Kiwanis and Rotary.

He was preceded in death by his parents and siblings: Eleanor Williams and Dr. Thomas A. Wise.

Messages of condolence may be sent to the family at www.dawson-wikoff.com.