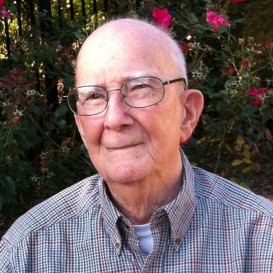 He is survived by four children: Mark (Janis), Mary Ann, Susan Fish (Todd), and John (Keith Cole); six grandchildren, and nine great grandchildren.  He was preceded in death by his dear wife of 60 years, Doris, in 2012.

Rev. Semingson was born and raised in Eau Claire, WI, and served in the U.S. Navy in the Pacific during World War II.  After returning from the war, he earned the BA degree at McKendree College (Lebanon, IL) and the Master of Divinity from Augustana Lutheran Seminary (Rock Island, IL).

For 50 years he served many congregations as Pastor in the Central IL Conference of the United Methodist Church.  In the early 1960’s he also served as a preacher for Methodist evangelistic tours through Korea and Mexico with Harry Denman, General Secretary of the Methodist Church’s Commission on Evangelism.

Rev. Semingson was a deeply caring pastor and greatly respected for living out his Christian faith in every aspect of his life.  He and Doris committed themselves to the Church and worked together as equal partners in their ministry.  He was also a kind, compassionate father with a great sense of humor and love for life.

A memorial service will be held Saturday, April 12th, 11:00 a.m., at Westminster Presbyterian Church, 3900 West End Ave, Nashville, TN, with the Rev. Donovan Drake and the Rev. Carson Salyer officiating.  Rev. Semingson will be buried in Salem, IL, with Doris.

In lieu of flowers, donations will be received for either the Westminster Memorial Music Fund or the Pastor’s Discretionary Fund and may be mailed to the church.