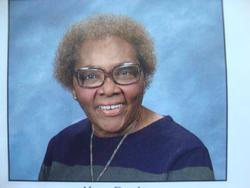 Alora Jean Bowles was born January 12, 1930 in Champaign, Illinois where she grew and thrived in the Lord. She was the 5th child born to Theotto and Luvata (Cabell) Bowles. Alora Jean was called home to be with the Lord at 4:45pm Easter Sunday April 20th, 2014 at the Carle Foundational Hospital in Urbana, Illinois. Her loving niece Melissa Betty was at her side at the time of her passing.

Following High School graduation, Alora Jean jumped straight to work for Bell South Telephone Company. She held various positions until she retired in 1984. However, she was not one to sit and be idle. For over 20 years Alora Jean worked part time for Busey Bank of Champaign, Illinois. Alora Jean was devoted to family. She lovingly cared for her parents Theotto and Luvata and managed their affairs until the day of their deaths.

Alora Jean was an avid football fan. To be specific, she loved the Fighting Illini of the University of Illinois. With a group of 4 friends, Alora Jean attended nearly every home game that she could. And when games were televised, she watched and cheered from the comfort of her living room chair. Interruptions to the game were not welcomed.

She was passionate about her craft of knitting and crocheting. For years she created numerous pieces such as hats, aprons, sweaters, scarfs, etc. She was known for knitting blankets for babies of family and friends. These works of art were known to be beautiful and detailed. Alora Jean had an eye for fashion and was known to be stylish in her attire whether at work or out on the town.

She also loved reading. Alora Jean kept up on the latest releases and when not spending time serving in ministry at church or enjoying football with friends, she explored the world through books. Another passion was that of cooking. Her kitchen was well stocked with a plethora of cook books and kitchen aids/tools. Pampered Chef was an icon in her home. She enjoyed going to the movies or the theater with her longtime friend Don Dodson.

Being a servant of the Lord was a joy for Alora Jean. She was a member of the ministerial team at the Wesley United Methodist Church in Urbana which she joined in November, 1967. She attended faithfully, sang in the choir and took pride in preparing/delivering Sunday school messages and all that was asked of her. For many years she served on the Worship Committee and participated in the Scriptural Foundations adult class on Sunday mornings. In 1995, Alora became a certified UMC Lay Speaker and served as the District Director of Lay Speaking from 1996 through 2012.

Alora Jean’s family and friends will miss her sharp wit and the candid observations she would share. She is survived by three siblings: Barneda Waddell of Harrisburg, Pennsylvania - Theola Murphy of Evanston, Illinois and Destin Bowles of Chicago, Illinois and a host of nephews, nieces, grand nephews and grand nieces. Alora Jean was preceded in death by her parents Theotto and Luvata and siblings Wilburn Bowles of Maywood, Illinois (1976), Yvonne Clark of Springfield, Illinois (1997), Morris Bowles of Pacoima, California (2012) and Quinton Bowles of Columbia, Maryland (2014).

The family of Alora Jean Bowles would also like to extend their heartfelt love and gratitude to Mariella Lansford, Margaret Rauschenberger, and Don Dodson. They have been a great help and support to the Bowles family during this difficult period. Memorial contributions may be made to Wesley United Church. Condolences may be offered at www.renner-wikoffchapel.com