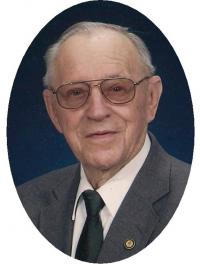 Mr. Davidson was born on March 25, 1911, in Atwater, IL, to the late Henry & Cora May (Evans) Davidson.  He married Hazel Davidson, they later divorced; he then married Frances Wilson on April 10, 1943 in St. Charles, MO. She preceded him in death. He then married Marie Ellen Schwab on June 9, 2001 at Calvary Baptist Church in Hillsboro, IL. She also preceded him in death.  Mr. Davidson served in the Army during WWII.  He had worked as a Truck Driver, in Farming & was a Minister in United Methodist Church from 1956 until retirement. He had lived in Sangamon County, IL; Christian County, IL; Fillmore, IL; Robinson, IL; Lawrenceville, IL and many other towns with his ministry; then moved to Hillsboro, IL in 2000.