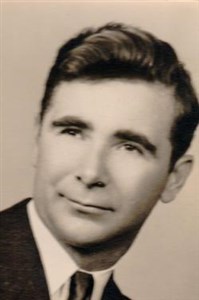 The Rev. Charles Arthur “Art” Ferguson passed away on Tuesday (July 17, 2018) at the Freedom House assisted-living facility at the Veterans Affairs campus in Danville. Art was 98 years old and had lived with his fellow veterans at the Freedom House for the past few years.

Art was born Sept. 21, 1919, in Beaver Township, Jefferson County, Pa., near the town of Timblin, to Maude Pearl (Eshbaugh) and Charles Arthur Ferguson.

Art was preceded in death by his wife, Emma (Anderson) Ferguson; his parents; a brother, Floyd; and two sisters, Jessie Decker and Anne Burkhart.

Art grew up in Pennsylvania “coal country.” During the Great Depression, he was a “water boy” for the WPA and delivered coal to homes in Timblin and Punxsutawney. He was inducted into the Army on Sept. 22, 1942.

Art was assigned to Company B of the 305 Engineer Battalion and served as a squad leader in northern France. Art earned the Good Conduct Medal, the European-African-Middle Eastern Campaign Medal and the Purple Heart. Art was wounded Sept. 4, 1944, in the European Theater. After being in hospitals for almost one year, Art was honorably discharged on Aug. 8, 1945. His character was rated “Excellent” on his discharge paper.

After World War II, Art worked in coal mines near Timblin as a member of the United Mine Workers of America, Local 726. While working, he finished high school and earned enough money to “quit” work and enroll at Asbury College in Wilmore, Ky.

Art graduated from Asbury with a bachelor of arts degree in 1952. On June 1, 1953, the U.S. Coast Guard certified Art to work as a Merchant Marine on the Great Lakes. Art worked on a lake freighter hauling bulk materials to multiple ports on the Great Lakes. Again, after saving enough money to continue his education, Art quit his job and enrolled in seminary school.

In 1957, Art received a bachelor of divinity degree from the Evangelical Theological Seminary in Naperville. After a dozen years, Art accomplished a goal he had set for himself while recovering from his war wounds in a military hospital. Art had become a minister!

Art first served as a pastor in the Evangelical United Brethren Church. Eventually, the EUBC merged with the United Methodist Church and Art became a Methodist minister. For almost 30 years, Art served multiple communities in northern and East Central Illinois. Prior to retirement, Art was simultaneously serving as the pastor for congregations at the McKendree and Fairview United Methodist Churches in Vermilion County.

During his later years, Art became known throughout the Westville and Georgetown areas as a philosophical yet whimsical person with a kind and generous heart. He enjoyed chatting with his neighbors, going to restaurants, playing checkers with his friends at the Freedom House, visiting his bank in Georgetown, seeing his sons and grandchildren, and shopping for new cars.

Art spent many holidays with his friends and neighbors and going to family parties. He especially enjoyed touring the Illiana countryside with his buddies while munching on Reese’s Peanut Butter Cups, dipping in a can of snuff, and stopping at a roadside cafe for apple pie and vanilla ice cream.

Art received excellent care while living in the Freedom House at the Danville VA the past five years. He developed many friendships with Illiana Health Care System staff members and fellow veterans. Art’s family thanks everyone, veterans and staff, at the Freedom House for the care and respect given to Art. His life was truly enriched!

Funeral services will be 11 a.m. Tuesday, July 24, 2018, at Robison Chapel in Catlin, with Bruce Ferguson officiating. Catlin American Legion will provide military honors. Visitation is from 10 a.m. till service time on Tuesday at Robison Chapel. “Art” selected the National Cemetery in Danville as his final resting place and those wishes will be honored.

Online condolences may be offered at www.robisonchapel.com.